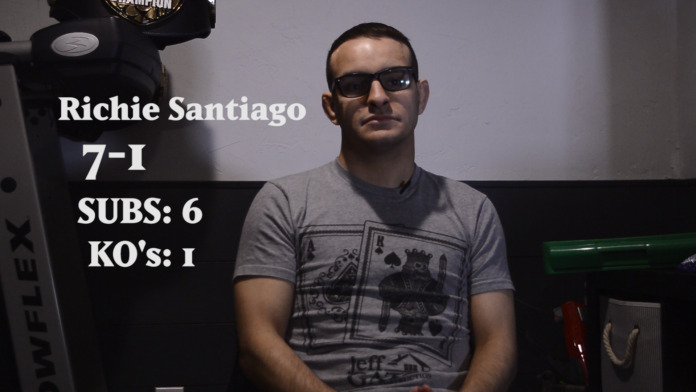 Richie Santiago fights for a UFC contract on week 2 of Dana White’s Contender Series. It’s been a long journey for the young professional, yet only one performance stands between the Massachusetts fighter and an indiscriminate goal. Santiago spoke with MMASucka immediately following the announcement of his bout on the UFC affiliate show.

For Santiago, the success of his professional career was not mirrored in his start within the amateur ranks. As an amateur, he lost four of his first five bouts. This rough start included three consecutive losses. Once at the mark of 1-4, he no longer lost another amateur bout. He ended his amateur days by earning the vacant Cage Titans amateur flyweight title and defending on consecutive events.

After turning pro, Santiago strayed away from Plymouth, Massachusetts to Lincoln, Rhode Island, where he fought nearly his entire pro career. Under the CES banner, Santiago continued his success climbing his way to six consecutive wins and a 7-1 record. The Massachusetts fighter has never gone the distance in any of his seven victories. In his seven wins, he holds six submissions and one TKO stoppage. Each of his six submission victories came by way of rear naked choke. His high level of talent in this regard dubbed him the nickname, ‘Rear Naked Richie’. Of course superseded by his current nickname, ‘The Milford Mauler’.

Santiago faces Miles Johns in the very first bout of week 2 on Dana White’s Contender Series. Johns is an LFA champion coming into DWCS undefeated with a record of 8-0. Hailing from Kansas, he trains out of Dallas, Texas and the recent uprising gym, Fortis MMA. Johns boasts four stoppages in his eight bouts. In his most recent cage appearance, Johns defeated Adrian Yanez in a closely contested bout to earn the vacant LFA bantamweight title.