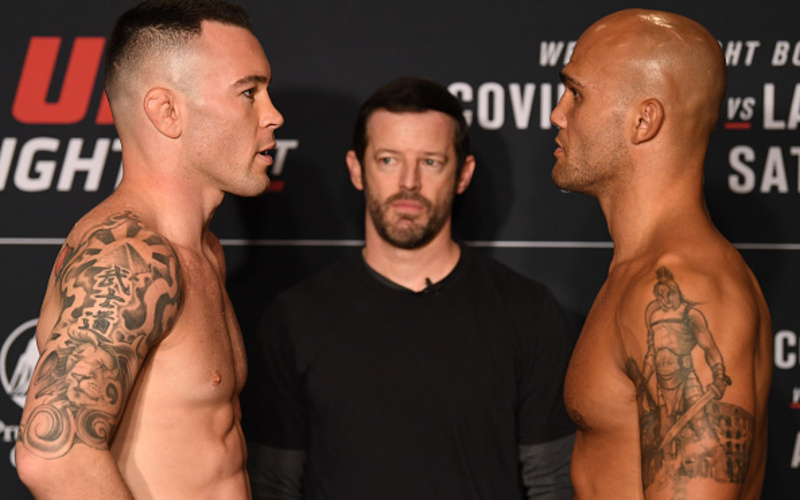 The UFC returns to Newark, New Jersey for UFC on ESPN 5 as a very important fight for the welterweight title picture goes down in the main event. The UFC’s former interim welterweight champion, Colby Covington, will be trying to earn back his title shot. He will have a tough test in front of him as he takes on former UFC welterweight champion, Robbie Lawler.

Covington’s last fight in the octagon took place at UFC 225 in June 2018. That night, he faced former UFC lightweight champion, Rafael dos Anjos, for the interim welterweight title. Covington won the fight by unanimous decision, locking up a shot at the undisputed title. However, Covington would never get his title shot and instead was replaced by Kamaru Usman, who defeated Tyron Woodley to become champion at UFC 235.

Coming off back-to-back losses, Lawler is taking no steps back with a fight against Covington. His most recent outing was at UFC 235 when he took on UFC newcomer, Ben Askren. Within the first thirty seconds of the fight it seemed as if Lawler would win as he slammed Askren down and rained down heavy ground and pound. Unfortunately, Askren was able to reverse the position and eventually submitted Lawler with a controversial bulldog choke.

In the co-main event, two UFC veterans finally cross paths for the first time. Jersey’s own Jim Miller will face another storied vet in Clay Guida. Both fighters are coming off a recent win as Miller recently defeated Jason Gonzalez in April. Guida’s most recent fight was against former UFC lightweight and welterweight champion, BJ Penn, who he defeated by unanimous decision.

Kicking off the main card will be a light heavyweight fight as Darko Stosic takes on Kennedy Nzechukwu. Following that will be a lightweight bout as Scott Holtzman faces Dong Hyun Ma. The main card’s third fight will feature a couple of middleweights as Trevin Giles faces Gerald Meerschaert. Finally, before the co-main event, will be another fight at 155-pounds as Joaquim Silva takes on Nasrat Haqparast.

Follow along with MMASucka as we provide you with the results throughout UFC on ESPN 5.