PFL Season 2 Week 6 transpired on August 8th in Atlantic City. The heavyweights and light heavyweights brawled and the playoff standings for each division are set. Here is a recap of the most invigorating moments from an action packed night.

The betting odds were closer on this fight than any other PFL 6 match. It was closely contended through the better part of the 1st round, but Alex Nicholson landed a liver kick followed by a right that landed flush and ended it with a barrage of ground punches. Nicholson entered the fight with a 92% knockout rate and his win against Zeke Tuinei-Wily will help raise that. Nicholson earned a quick six points and a spot in the PFL heavyweight playoffs.

THIS IS SPARTA! Alex Nicholson @spartanlife32 gets his first win of 2019 and earns 6 points with a huge KO. #PFL6 pic.twitter.com/xF9TXNmdwe

Revenge in a big way! @emilianosordi evens the score against Bozigit Ataev and earns 6 points with a vicious first round KO. #PFL6 pic.twitter.com/oUmWqIUlCH

A weird, yet entertaining fight. Denis Goltsov dominated Kelvin Tiller in the first round with a knockdown and severe ground and pound. Tiller regained his wits in the second round after two successful takedowns, but was deducted a point for a faulty mouthpiece. Goltsov ended the fight by Ezekiel choke in the second round and now owns the top spot in the heavyweight division. Tiller took plenty of damage, which some deemed unnecessary because he already clinched a playoff spot.

This fight ended in decision, which usually would not make a list of the most exciting MMA happenings, but Khabib Nurmagomedov‘s undefeated cousin making his PFL debut seems to significant to leave off this list. Umar Nurmagomedov won by unanimous decision and will become a staple in the PFL and someone they will want to push and promote as much as possible.

Muhammed Dereese did not take kindly to Vladrin Istrefi‘s (unintentional) low blow, so he knocked him to the ground and ruthlessly ground and pounded until the fight was stopped. Dereese earned six points and a spot in the heavyweight playoffs. Keep an eye on Dereese vs. Tiller, which is a possible matchup that presents glaring similarities.

The crowd was not amused at the masterful punch that landed by Maxim Grishin because the general public thought this was an early stoppage. After watching the replay, they erupted after seeing the power behind the right hand that dropped Mikhail Mokhnatkin. After earning six points in this match and three points in his first, Grishin earned the number two seed and will rematch Jordan Johnson.

The power of Maxim Grishin ended this one in 48 seconds! #PFL6

Vinny Maglhaes changed the pace of the night in a pleasant way, beating Rakim Cleveland by first round submission. It was a masterful armbar that earned him the three seed in the 205 pound playoff rankings.

The PFL playoff brackets for the light heavyweight and heavyweights are below.

Throwing down at heavyweight in the #PFLPlayoffs! 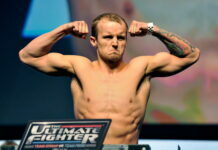 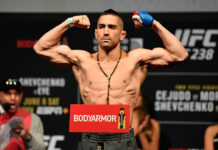