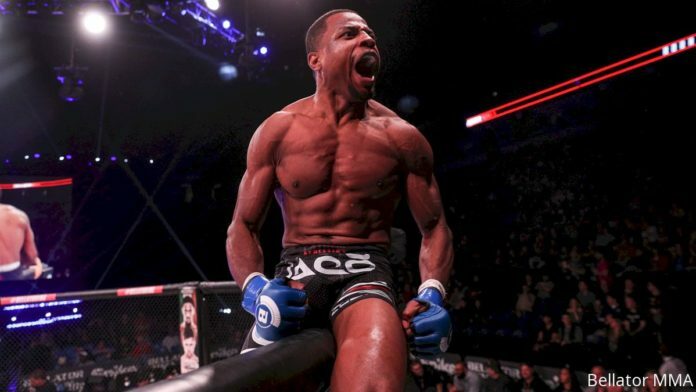 Tywan Claxton is slated to take on Emmanuel Sanchez at Bellator 226. With Bellator 225 in the rearview, we look forward to a great card on Saturday, September 7th. Sanchez vs. Claxton is one of four featherweight grand prix bouts set to go at SAP Center in San Jose, California. Claxton has the least experience of all 16 fighters in the tournament but he’s an unbeaten, dynamic fighter that some are viewing as a dark horse.

Claxon’s entire pro run has been under the Bellator MMA banner. The chance to grow in Bellator and hone his skills up until this hugely important moment is not something Air Claxton takes lightly. He said, “I like being part of Bellator. It’s not too big and it’s not too small. There’s room for growth.”

When the tournament was initially announced, none of the matchups were put out there.  Combatants signed blank contracts not knowing who their specific opponent would be but only that they’d be in a tournament structure. This is not an altogether uncommon practice in the Scott Coker era of Bellator but the promotion also hasn’t done a tournament to this scale either.

In regards to his opponent, Claxton said “Sanchez is an experienced guy. He’s a tough guy. We have contrasting styles but you know I’m very confident in the way that I’ve been training and very confident in my abilities to go out there and do what I have to do.”

One of the big draws to the tournament is that the winner gets a million dollars. Participants in this grand prix have offered up a variety of ideas for how they would spend the money. What Claxton would allocate the money to is wholly unique. Claxton would use the million dollars to invest in apps that he’s working on. Air Claxton started designing apps in college and is now getting interviews with Google these days.

Claxton sees a tremendous amount of overlap between coding and MMA. He said, “Code and fighting are equivalent to me in my brain. So say you have a class, right? In a class, I can put an integer, a variable. I correlate that over to a fight. Say you have an armbar? You can have a hand inside armbar, hand outside armbar.

Claxton continued, “How do you make two sets of things work? It’s all about the flow and being able to think two or three or four steps ahead. The way you also factor in things like positions. Is this cost-efficient?”

Claxton is someone who carries the ethos of “I never liked school but like learning” to both of his passions. Things weren’t always this way for Claxton though. There was a time where winning didn’t come as easily and he had to rally through some trying times, competitively.

At one point in his younger years, Claxton went 0-10 a decade ago at a wrestling tourney. Claxton was new to the sport of wrestling and that was his first national tournament. Things felt unfamiliar but with the benefit of timing, Claxton now has a definite fluidity while fighting. While he’s aware he’s fighting the “big dogs”, there’s a sense of comfortability and serenity that Claxton feels while fighting.

This was evident by his highlight-reel flying knee knockout that gets played ad nauseam.  Claxton sees the flying knee as being cool but wants people to respect him more as a well rounded martial artist. He has lots of tools in his toolbox and sees the grand prix as a chance to showcase his multiplicity of martial arts skills.

As much as Claxton makes big impressions with his performances, he’s not one for any pre-planned theatrics. No fancy entrances to fights for Claxton. He just needs to tap into a good vibe and he’s good to go. Claxton said, “I like to hear some music, feel my vibe, get my little dance on to the cage. I like that vibe to be authentic and not planned.”

Claxton’s criteria for a good direct message has also changed over time. Before his Bellator debut, the DM’s were wide open but now you have to bring some level of creativity to the approach. Claxton said, “My DM’s are good but you’ve got to stay out of the DM’s with Hi. I need something with a little more substance than Hi. You need to bring a little bit more value to the table than that.”