During the broadcast of KSW 50: London, it was announced KSW legend Mamed Khalidov (34-6-2) is coming out of retirement to face the man to win the four-man tournament to crown his successor, Scott Askham at KSW 52. It will be a full year since we have seen Khalidov in action as his last bout was a decision loss to Tomasz Narkun at KSW 46.

Khalidov vs. Askham at KSW 52

After Khalidov vacated the middleweight title, a four man tournament consisting of Askham, Marcin Wojcik, Michal Materla, and Damian Janikowski. The finals came down to Askham and Materla who met at KSW 49: Materla vs Askham 2 in May 2019. Askham dominated the fight to win via third round flying knee. In multiple conversations with MMASucka, Askham has stated it is a shame he cannot defend the title against the legendary Khalidov. Askham is currently on a four fight winning streak with a 3-0 record since joining KSW. He has a very strong 18-4 record with those four loses coming under the world’s toughest organization, UFC.

Khalidov is arguably one of the biggest names in European MMA history. Since his relocation to Poland, Khalidov as been the favorite child of Polish MMA. Prior to the first loss to Narkun in March 2018, Khalidov has not suffered a loss since March 2010 which was a very controversial decision loss to Jorge Santiago. His organizational debut came at KSW 7 and since then he has headlined all of KSW’s major shows. KSW 52 in December 2019 will be no different. 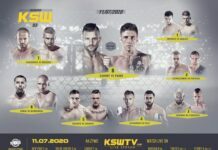