Yes, you read that right. Greg Hardy will fill in for the injured Junior Dos Santos at UFC Moscow to face Alexander Volkov.

Talk about a quick turnaround. After a decision win (later overturned to a no contest) against Ben Sosoli at UFC Boston, Greg Hardy will have an extremely quick turnaround, fighting just 22 days later at UFC Moscow against Alexander Volkov.

Other than his checkered background and brief NFL stardom, Hardy burst onto the mixed martial arts scene by way of Dana White’s Tuesday Night Contender Series and made his UFC debut on the first ever UFC card of the ESPN era, where he lost due to a disqualification. Since then, he has been active. Extremely active. Obviously fighting is what mixed martial arts is, but fighting a lot is an undervalued facet, and Hardy has done exactly that.

Also, when he fights on 11/9, Greg Hardy will be the first heavyweight in the history of the UFC to fight 5 times in a calendar year, per @ESPNStatsInfo. Nine others have fought four times.

Two of his four 2019 fights have ended in first-round knockouts, too. Impressive statistic for the haters, yeah?

Volkov has not fought since UFC 229, which was in October of 2018, where he looked to extend his six-fight win streak against Derrick Lewis, but lost by gruesome knockout late in the third round. And yes, this is when Lewis’ balls were hot.

Well, for those demanding Hardy face better competition, you got your wish and then some. Volkov presents every challenge imaginable for Hardy. He is taller than any of Hardy’s previous opponents, has more UFC fights than any of his previous opponents and is simply the most skilled fighter Hardy has encountered. With all of that being said, Hardy is the one that asked for this fight, which proves the level of confidence he has in his game. Possibly too steep a step up after only two UFC wins, but time will tell. Look, if I were Hardy, there would be no way I take this fight on short notice. Going from facing unranked newcomers to one of the most skilled the division has to offer seems absurd, but who am I to judge?

Don’t expect a Rory McDonald vs. Robbie Lawler bloodfest. Don’t expect a technical wrestling matchup. Volkov’s last three fights have ended in a knockout, but all went into the third round or further. Hardy has won five fights by knockout, all coming in the first round. So, expect a knockout. Possibly very early. Being completely honest, this fight is a tough one to call. Hardy is understandably displeased with his no contest and will be looking to prove the doubters wrong. So, we could expect a Hardy, first-round knockout. Because why not?

Khabib and Gaethje Make for a Refreshing Change 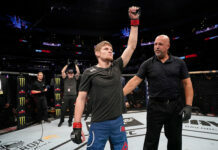