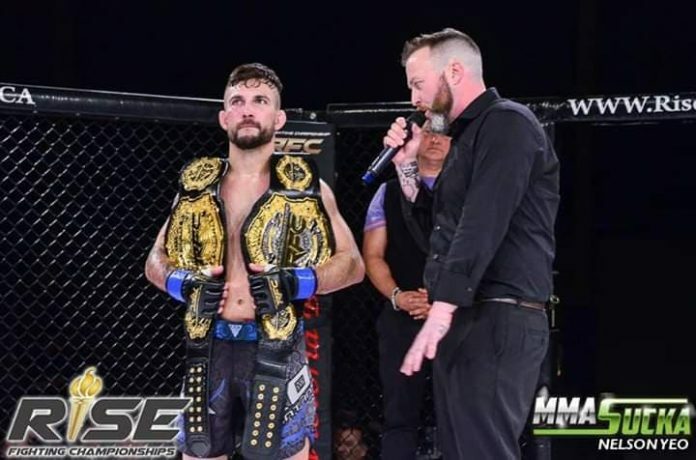 Rise FC 5 is only a couple weeks away as it takes place on November 30th from Chilliwack BC. This fight card looks to be one of the biggest in their short history with 4 championship fights on the schedule. Headlined with the Rise bantamweight championship being on the line, the card will also feature fights for the welterweight, featherweight, and amateur lightweight championship. Unfortunately, earlier this week the bantamweight main event hit a small roadblock.

Rise FC 5 was slotted to have one of the biggest bantamweight fights in the country happen. Chad Anheliger was set to defend his bantamweight championship against Jamie Siraj. However, earlier this week Rise FC posted via their Instagram that Jamie Siraj had to pull out due to injury.

It is a bit of a bitter sweet moment for us as we have worked hard to release this amazing event poster but only to have to also announce that the main event between champ @the_monster_ca and challenger @jamie.siraj is OFF due to injury from Siraj camp. This would have been THE BIGGEST bantamweight fight in the country but we look forward in making it happen on the next one. But stay tuned as the Champ will be facing someone else worthy to stand across him on November 30th.

With the fight only 3 weeks away, Rise FC found an undefeated 4-0 prospect named Brady Hiestand to take the fight. Hiestand is coming off a TKO win at Conquest of the Cage in May of this year. With three of his four wins coming via finish, this fight still looks like it will have an exciting buzz behind it.

Anheliger broke his hand winning the championship earlier this year. After taking some time off too, he is back in the cage, ready to defend his title for the first time. Riding a seven-fight winning streak with six coming by finish, Anheliger will be looking to show that the Rise bantamweight division belongs to him.

Even though it isn’t the original main event, this fight looks like it will still have a lot of fireworks. Both fighters like to finish their fights so don’t be surprised if the judges aren’t needed in this one.

Stay tuned to MMASucka as we bring you fight news and live results from Rise FC.