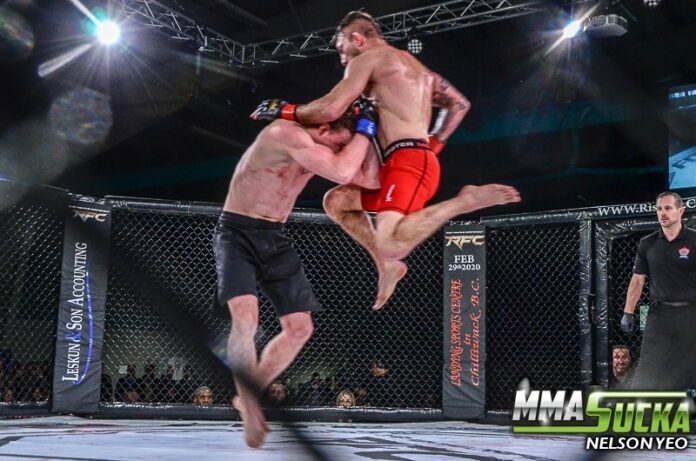 Rise FC 5 took place last night live from the Landing Sports Centre in Chilliwack, BC. The big names of MMA were in attendance to watch or coach their teammates including Bellator’s Julia Budd, Lance Gibson Jr, UFC’s Cole Smith, Tristan Connelly and also ONE Championship’s Bibiano Fernades. With three championship fights on the line, MMASucka was cage side live to bring you results and a Rise FC 5 Recap.

The first of three title fights happened in the Rise FC amateur lightweight division. Raphael Ouelett met Damon Marlow for the third time in their short amateur careers. Now they are fighting for a title and to find a winner to their trilogy. The first round saw Marlow drop Ouelett right away, but Ouelett was able to recover by using his strong rubber guard. The first round ended with Ouelett trying to catch Marlow in a submission but nothing was working. The second round was much like the first, Ouelett was dictating the pace on the ground and eventually, he was able to sink in a deep armbar halfway through the round. The submission victory made Ouelett become the first Rise FC amateur lightweight champion.

The co-main event had John Nguyen fight Radley Da Silva for the vacant featherweight championship. The first round went back and forth, they both had time in top control when the fight hit the canvas. Da Silva was able to outwrestle Nguyen most of the fight. In the second round, Da Silva took the back of Nguyen and was able to sink in a rear-naked choke to become the Rise FC featherweight champion.

In featherweight action, Josh Kwiatkowski took on Randy Mahon in Mahon’s final fight before retiring. Kwiatkowski dictated the pace from the start of the fight pushing forward and stunned Mahon a few times. In the second round, Kwiatkowski kept applying pressure and dropped Mahon, after a fury of punches Kwiatkowski earned himself a TKO victory. There was a great amount of respect between both fighters going into this fight and they shared a nice moment of sportsmanship in the cage after the fight.

The first fight on the main card saw James Foster fight Alex Branom at middleweight. This was easily one of the loudest fights of the night as both fighters had the fans out of the seats cheering loud. The entire fight was a back and forth stand up war. Both fighters ate shots and it looked like Foster may have broken his nose early. They traded shots for three rounds and at the end of it, the judges called it a split decision draw.

Head over to our website for the full Rise FC 5 Results.