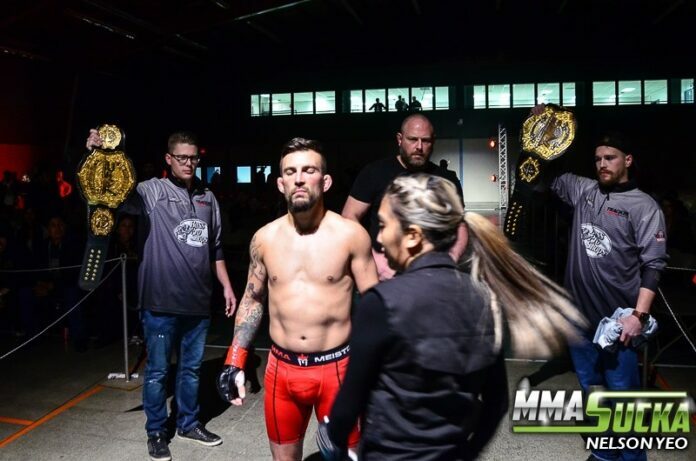 In 2010 “The Monster” made a splash on the professional mixed martial arts scene. Calgary, Alberta’s Chad Anheliger is currently on an eight-fight winning streak, but it didn’t start that smooth.

A rough start for Chad Anheliger

After a short amateur career, Anheliger decided to turn pro. Taking his first fight in December 2010 and his second just five months later in May did not fair well for the Champions Creed Martial Arts product. He lost both outings and began his journey with a 0-2 start.

Anheliger fought twice in 2012. He stopped Chantha Bun and Adam Imhoff in the first round of their respective matches bringing his record after four fights to 2-2.

Three cancelled fights led to a 16-month layoff heading into 2013. This was not the best thing for Anheliger as he wound up losing his next three fights, bringing his record to 2-5.

“The layoff was based on a couple of factors,” Anheliger stated. “My commitment to fighting was not that solid and I broke my arm in the fight before the layoff, so that set me back. It was a long battle to get back to competition ready.

I came back too soon. I was young and hungry to fight but had major injuries and issues that were not ready. I had a lot of motivation through that period but I lacked guidance and direction.”

A two-year hiatus brought Anheliger to early 2016. He picked up a victory in his first bout back and has since racked up an impressive eight-fight winning streak. This brought his overall professional record to 10-5.

“The two years after that losing streak are the reason I’m winning today,” Anheliger said. “I decided to change gyms from Canuckles to Champions Creed. When I got to my new gym I had to start on page 1 and prove my dedication to my new team and coaches. I worked on the holes in my game that my coaches saw. That took two years of very hard work. Then when we started fighting again, I was a brand new fighter.”

Winning eight in a row in any sport is no joke, but in MMA with someone standing across the cage from you, literally trying to take your head off is very impressive.

At Rise FC 2, Anheliger made his promotional debut. He dropped to 125-pounds to vie for the inaugural flyweight championship. This bout did not last long, as Anheliger was able to knockout Terrence Chan in the very first round.

With the flyweight title around his waist, the Alberta native looked to capture a second championship. At Rise FC 3, Anheliger took on Craig Maclean for the vacant bantamweight championship. Once again, The Monster proved his fists were made of stone, finishing Maclean by knockout in the third round.

Most recently, Anheliger defended the bantamweight championship in a bloodbath at Rise FC 5. The champ was expected to take on local sensation Jamie Siraj, however, an injury forced Siraj out of the bout and in stepped Sikjitsu product Brady Hiestand. Anheliger bloodied Hiestand up in the first round, but “Bam-Bam” just kept pushing forward, even finishing the round off in impressive fashion. The second round began with Hiestand pushing forward, but a short punch from Anheliger dropped the American and forced the referee to call a stoppage to the fight.

“The time is now for me,” the 33-year-old stated. “I’m in the best place physically and mentally. I have earned my opportunities, and I believe with my latest performance, I have earned a shot at the biggest organizations. I fear no man in that cage and believe in my skills. I want the best in the world because it brings out the best in me.”