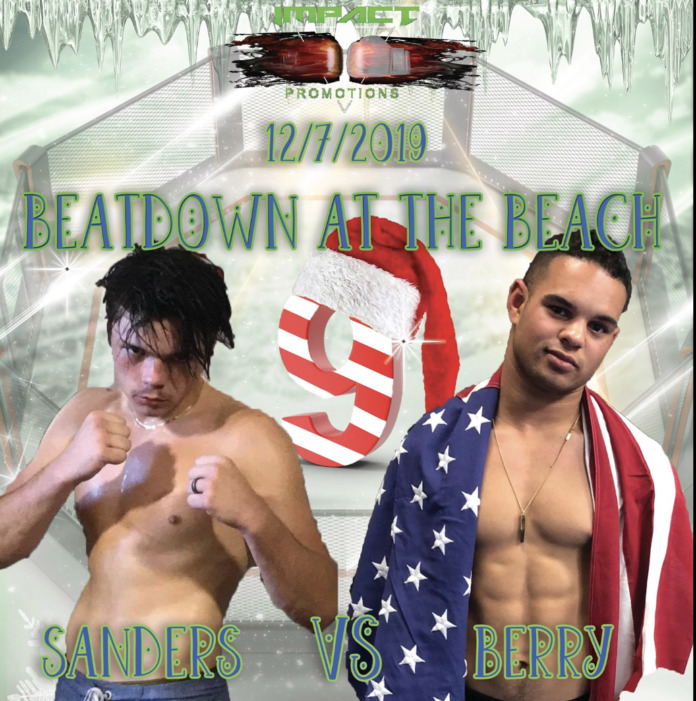 Impact Promotions is a local Florida based mixed martial arts promotion. This weekend will be their ninth event titled, “Beatdown At The Beach 9.” The main event will be between bantamweights Chris Wright and Cody Shelton.

Although the promotion does showcase some pro/am events, this one is slated to be all-amateur. They have even been featured on an Island Fights card back in March of this year.

Beatdown At The Beach 9 will showcase seven grappling matches, one kickboxing match, and 11 amateur MMA fights. With some of the grappling matches being marked as “Youth Grappling Matches.” Those youth matches range anywhere from 80-110lbs. SD Dumas will be competing in a grappling match against Thor Shaffer. Dumas is one of the pioneers of Impact Promotions who has been with them since they started putting on fights.

Impact Promotions has a variety of homegrown talent that has been with them since the start of the company. The most notable on the card would be Gabe Schierberg who will be fighting Houzston Belew in a 190lb catchweight fight. The card will also feature Matt Sistrunk taking on Brandon Grace in a heavyweight bout. Dylan Berry will be taking on Moses Sanders in a featherweight bout in the evening’s co-main event. Berry, Sistrunk, and Schierberg have to be added to the pioneer category with Dumas, as they have also all been with the company from the jump.

When Where And How To Watch

Beatdown at the beach will take place on Saturday, December 7. The event will be held at the Laketown Wharf in Panama City Beach, Florida. This event will be broadcasted live on the Impact Promotions facebook page. (See link below)

Beatdown at the beach 10 will take place on February 1st, 2020. Being held at the Laketown Wharf in Upper Grand Lagoon, Florida. The fight card has yet to be announced.