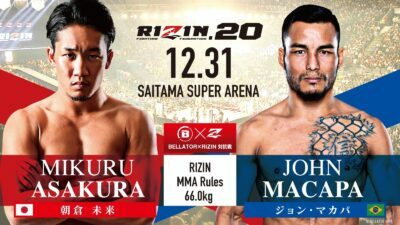 You may not know who John Macapa (23-4-2) is now, but after RIZIN 20, he wants to make sure all MMA fans know his name. The Brazilian makes his RIZIN debut in Japan representing his home promotion Bellator for the RIZIN New Year’s Eve show against RIZIN’s Mikuru Asakura (11-1, 1 NC). This will be one of five matches that pit Bellator’s best fighters against RIZIN’s. Asakura has dominated all of his RIZIN fights, including knocking out two of his opponents. Macapa knows he in for a tough fight but that is not stifling his confidence.

Macapa, 33, trains out of the famed Brazil camp Nova Uniao, where he trains alongside former UFC champions Jose Aldo and Renan Barao. He got his start in the sport after a friend invited him to start training. “I started training at the invitation of a friend and at first, I had no desire to fight MMA,” he said. “But at the insistence of my teachers and training mates, I made my debut and fought three times in less than a week, so I never stopped. I have always been tested in big events with great fighters”. Those three fights he finished all his opponents by armbar submission.

For Macapa, it’s a “dream come true” to fight in Japan. Watching other fighters like Wanderlei Silva and Antonio Nogueira make their name on such a grand stage, he now gets his turn to make his name known internationally. He also said he looks forward to fighting under the RIZIN rules, which allows for kicks and knees to a grounded opponent. “It will be a pleasure to fight the rules of RIZIN, an experience I’ve been wanting to have for years.”

There is no trash talking coming from Macapa. He recognizes the former street fighter’s skills in the ring. “[He is a] very skilled fighter who will surely have a lot to offer me on the day of the fight,” Macapa said. As for how he is preparing for the fight, he states that he is training smart which will ensure him the win at RIZIN 20. “I will do everything to leave with the victory,” he said.

RIZIN 20 airs live from the Saitama Super Arena on FITE.tv on New Year’s Eve at 1 a.m. EST. You can order the show here.