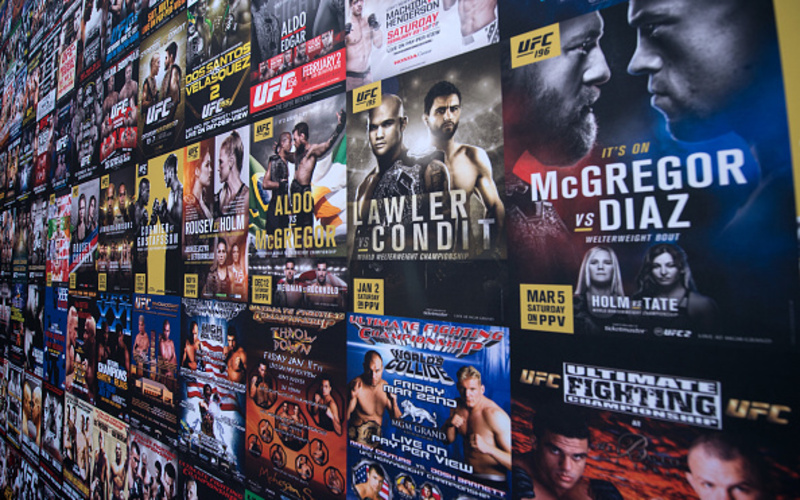 As still a relatively new sport, MMA is still in a transition period. Unlike our counter-part, boxing, which has reportedly been around since 1681, MMA is still trying to figure things out. There are a number of things that should be changed to improve the sport, some from a rules point of view and some from a fan perspective. We outline three things that could easily change in MMA in 2020.

Now, this isn’t to say that all promotions fight posters are poor but it is undeniable that the UFC, in particular, are putting less emphasis on their fight posters in recent years. Long gone are the days of the infamous UFC 181 poster, where the promotion teamed with DC Comics to produce a quality poster. There appears to be a lack of thought, effort and an overall emphasis on fight posters as of late, especially in the UFC and Bellator.

Who will be crowned the NEW Invicta Strawweight Champion? The official #InvictaFC28 poster by @Bosslogic is here! 🔥

Fight posters are the things that go down in history. They’re something that fans look forward to seeing. It is such an easy fix just to put in a little extra effort and create a masterpiece. Understandably, you’re not going to please everyone but an improvement is certainly needed.

This is something that is more focused around the UFC, rather the MMA overall. The rankings system within the UFC is majorly flawed. There are two options as to what to do with it. Either scrap them completely or fix it.

By scrapping it, there would be little backlash from fans. Maybe being able to sell a #1 vs #2 fighter match-up to casuals, but other than that we won’t lose much. The rankings are often overlooked in favour of an ‘exciting’ match-up, or a ‘money fight’. On this logic, doing away with them will cause no real harm.

If they were to be kept, they need to be improved. Many fighters are in the rankings, arguably undeservedly. An example of this would be Paige Van-Zant. Van-Zant is 2-3 in her last five fights and hasn’t won since the beginning of January 2019. Despite this, she is #14 in the division. On the flip side, Molly McCann is 3-1 in the UFC and on a three-fight winning streak and has been extremely active. Despite this, she isn’t ranked at all.

Similarly, with respect to the GOAT, Anderson Silva hasn’t won a fight at middleweight since 2017. Even that win against Derek Bruson was controversial. He hasn’t won two fights back-to-back since 2012, yet is still ranked #15 in the official rankings. Darren Stewart, who is 4-1 in his last five is not in the rankings, despite impressing as of late.

Other contentious rankings places go to John Dodson (3-1 in his last four fights and hasn’t won since March 2018). Robbie Lawler (moved higher in the rankings despite not winning a fight since July 2017 and is 1-4 in his last five). Finally Sijara Eubanks. Eubanks is 2-2 in the UFC, her two wins coming at flyweight. She is currently ranked #15 at bantamweight, despite being 0-2 at the weight. Where is the logic there?

3. More Weight Classes in the UFC or More Catchweight Fights

The time has come to address weight cutting in MMA. Although it has been an issue for a while now, this year we have seen it taken to the extreme. Notably, TJ Dillashaw and Jose Aldo have cut an additional 10lbs from their previous fight weight to fight in the division below. Many have also gone the healthier, safer option and moved up in weight. Notable names that come to mind are Darren Till and Chris Weidman.

There have been rumours of the UFC introducing a new 165lbs division for some time, yet nothing has come from it. Why should this division come into existence? Just think about the fighters who could compete in it.

Conor Mcgregor has fluctuated between lightweight and welterweight. His upcoming opponent Donald Cerrone has also changed weight classes often. It could also include former lightweights Kevin Lee, Rafael Dos Anjos, Anthony Pettis, Michael Chiesa, Jorge Masvidal, Nate Diaz, and Gilbert Burns, to name a few. That is already a stacked set of fighters. Those who are deemed ‘smaller’ welterweights can also move to 165lbs.

Colby Covington doesn’t cut a lot to make the 170lbs limit and could compete at 165lbs. Similarly, Gunnar Nelson had early success at welterweight but recently has struggled against those at the top of the division. A drop in weight class could be beneficial for the Icelandic native.

The current welterweight division (170lbs) would then change to a 175lbs limit. This would lead to all weight classes having a 10-pound gap between them. That is until you reach the gap between middleweight and light heavyweight.

Again, this is a simple fix, create a 195lbs division. Top names from middleweight such as Weidman, Jacare Souza, Luke Rockhold and Yoel Romero could fill out the 195lbs division. #1 middleweight contender Paolo Costa would also be welcomed to the division. Following his UFC 241 bout, it was recommended he move up from 185lbs after he rehydrated to 213.8 lbs on fight night.

A 225 division needs to be made. If a fighter cannot make 205lbs but isn’t a big heavyweight, it is simply dangerous for them to be put in with a 265lbs fighter.

Champion, Stipe Miocic weighed 230lbs for his fight at UFC 241. He could potentially make 225 and fluctuate between the two weight classes.

Another example is up and coming 10-1, Sergey Spivak. Spivak weighed in at just 233lbs for his most recent fight. He came up against 264lbs Tai Tuivasa. That is a weight differential of 31lbs.

This is the equivalent of putting a lightweight in there with a middleweight. Would we ever see Cerrone in there with Romero? Well, maybe, but that says more about Cerrone than anything. No, of course, we wouldn’t, it would never be sanctioned. So why is there such a big allowance at heavyweight?

A lot of current UFC bouts have no title implications and no ranking implications, especially on Fight Night cards. This, therefore, leads to us proposing more catchweight fights.

Bellator, more often than not have a catchweight fight on their cards. Whether it be between two weight classes or simply because one fighter will not make weight, catchweight bouts are making it safer for the fighters themselves.