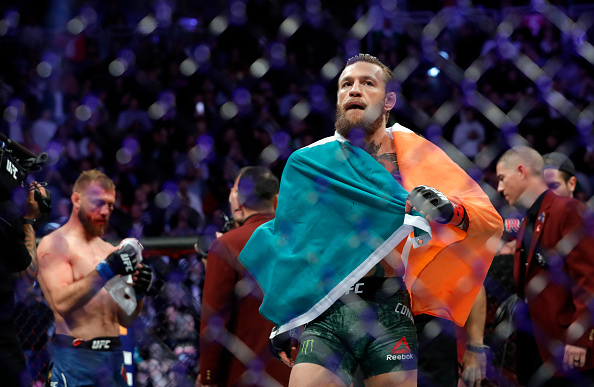 Last week we took a speculative look at Conor McGregor’s mindset before his highly anticipated match up with Donald “Cowboy” Cerrone. McGregor’s UFC 246 performance certainly proved a point to fans and haters alike.

The fight lasted a total of 40-seconds. McGregor went for an early finish. While he missed with his signature left hand, the fight did not last much longer. “The Notorious” cracked open Cowboy’s nose with shoulder strikes. It was an innovative strategy that was unexpected.

Cowboy had one promising moment in the fight when he landed a head kick. However, that would be answered with a head kick in return from McGregor which caught Cerrone on the jaw and immediately floored him. The Irishman would follow up with a barrage of strikes. Herb Dean allowed Cerrone a chance to recover but had no choice other than to end the fight.

This brings us to the question of what McGregor’s UFC 246 post-fight options are. We take a look at some of them.

McGregor’s last fight before UFC 246 was against the undefeated lightweight champion Khabib Nurmagomedov. While the bout was a largely one-sided affair, McGregor became the first person in history to win a round against the undefeated Dagestani.  Nurmagomedov’s next fight is against none other than Tony Ferguson. His bout is scheduled to take place on April 18 later this year. While many diehard fans expect it to be the biggest matchup in the sport’s history, UFC President Dana White has already confirmed that should Nurmagomedov emerge victoriously we may be a preview to a rematch.

The lightweight Justin Gaethje has been on a winning streak. Do you know who knocked out Cerrone just before McGregor? You guessed it. Gaethje and Cerrone met late last year and Gaethje finished Cowboy in almost equally impressive fashion as McGregor with a first-round knockout. Gaethje has also knocked out the likes of Edson Barboza and James Vick in previous outings.

The lightweight contender has a wrestling background but is known for his durability and highlight-reel matches. His fights against Eddie Alvarez, Michael Johnson, and Dustin Poirier remain some of the most exciting fights seen in the last few years. Recently, he has been criticizing McGregor for not taking a fight against him. While the level of bad blood between the two may not be as much as it was with Nurmagomedov, this is still a contest that fans would be chomping at the bit to see.

Any match with Tony Ferguson is always an exciting one for fans. Ferguson is on one of the longest winning streaks in recent memory. Like McGregor and Gaethje, Ferguson’s last victory also came against Cerrone. While it wasn’t a first-round knockout, it was the result of a doctor’s stoppage and Cerrone did look like a grittier version of Mad-Eye Moody from the Potterverse.

Stylistically, this will be a very interesting match-up as Ferguson does have the tendency to take damage early on in his fights. However, Ferguson appears to have unrivaled cardio, and that has always been a question mark for McGregor.

However, this will unlikely be the next fight. Ferguson is getting ready to face Nurmagomedov for the lightweight title. For the fourth time. Fans are at this point probably more interested in seeing that.

The rivalry between Nate Diaz and McGregor has produced some of the most memorable sound bites in the UFC. The younger of the Diaz brothers was the first to face McGregor at welterweight, and in their first encounter secured a submission victory after bloodying the face of the Irish star.

The pay-per-views that the duo headlined broke records in the UFC and while McGregor secured a victory in their second exchange, the bout feels like unfinished business. While Nate last fought at the historic UFC 244 event, it is unclear if he intends to return to fighting immediately. However, we just might see this trilogy if Diaz feels that the price is right.

Many consider Jorge Masvidal, the fighter of the year for 2019. The fight-game veteran had three significant wins last year all of them coming by way of finish. His first was against the rising English sensation Darren Till, in his hometown. The second was a record-breaking five-second knockout against the then-undefeated Ben Askren. His third was against Nate Diaz at UFC 244 for the newly minted BMF title, a title that was brought into existence solely for the purpose of the marquee event.

The Miami native exploded to superstardom as none other than the Rock placed the belt around his waist in front of the many celebrities in attendance, including the US President. Masvidal attended UFC 246 live. He indicated to Megan Olivi just prior to the main event that he is interested in a fight with McGregor.

The reigning welterweight champion is coming off a hard-earned victory against Colby Covington last month at UFC 245. While he was also in attendance at UFC 246, Usman’s attention would have been occupied at least in part by his twitter account being hacked. Ironically, the hacker posted tweets taunting McGregor just before the start of the main card.

Usman has talked about facing McGregor and has expressed a high level of confidence in defeating him. However, this fight would also appear unlikely as this was McGregor’s first appearance in the weight class since his fight with Nate Diaz at UFC 202. Dana White has also indicated that he is attempting to book Usman and Masvidal to face off at some time in the future.

McGregor and Dustin Poirier have already had one encounter. This was when McGregor was on his ascent in the featherweight division of the UFC. Over half a decade has passed since that fight. Both fighters have evolved significantly. While McGregor has unparalleled achievements, Poirier has been impressive as well. Poirier won an interim title against Max Holloway in one of the best fights in 2019. He fell short against current reigning champion Nurmagomedov at UFC 242 in a unification bout.

A rematch with McGregor at this point is definitely within the realm of possibility.

Many people counted out that a crossover bout between McGregor and Floyd Mayweather would ever occur. Yet, the Irish superstar and the legendary boxer crossed paths after months of exchanging verbal barbs. The bout took place as one of the biggest in boxing history.

While this looks like an unlikely path for McGregor to take, it can certainly not be counted out. Additionally, Dana White and Mayweather attended a sports event together in public. Perhaps, something fun is in the works.

Manny Pacquiao’s name often comes up in discussions involving the greats of boxing. The professional boxer and Filipino politician is an active contender in the world of boxing even in his forties. With boxing and MMA being closely associated, it is not inconceivable that we see McGregor and Pacquiao at some point in time in the future.