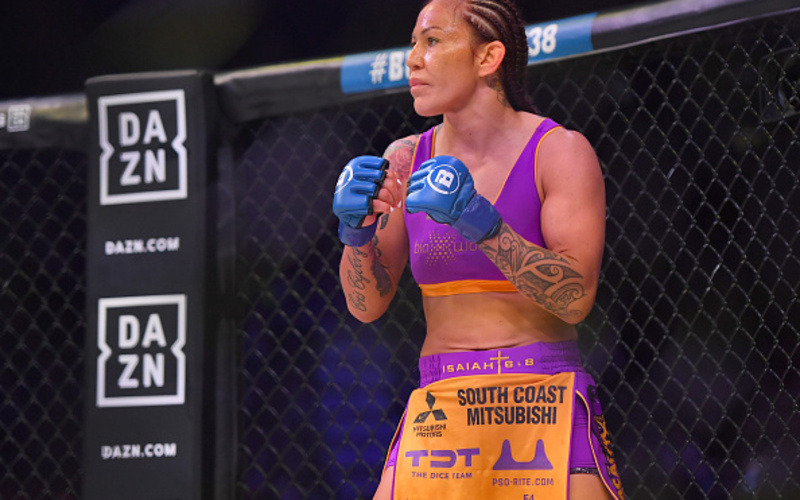 The new year and decade started out with a bang for Bellator at The Forum in Inglewood, California with Bellator 238. The card featured two stars from other sports, the first husband/wife combo fight on the same card for a major organization, another chapter in the Featherweight World Grand Prix. The main event of Bellator 238 saw a featherweight championship fight featuring Julia Budd and the Bellator newcomer Cris Cyborg. Below are the results for Bellator 238.

While the former boxing champion and member of the highly-promoted Merging Vets and Players (MVP) program, Ava Knight landed the first punch she threw, it was all downhill from there. Emilee King, a 4th-degree taekwondo black belt and judo black belt dragged Knight to the mat by threatening a guillotine choke. She then rolled into mount and lost the choke but went for an armbar. Knight was able to get out of it and reverse position for a short moment, but King eventually took Knight’s back and put her to sleep with a rear-naked choke.

Emilee King wins by submission (rear-naked choke), 2:18 of Round 1

With the win, the Knoxville Martial Arts Academy fighter in King improves to 4-3, while the “Lady of Boxing” in Knight moves to 1-1 in MMA.

There’s a reason that Raymond Daniels calls himself both “The Human Highlight Reel” and “The Real Deal”. The current Bellator Welterweight Kickboxing Champion deployed flashy techniques en route to a dominant win over “The Asian Persuasion” Jason King. King is the husband of Emilee King, the victor in the previous main card fight, making them the first married couple to fight on the same night in a major MMA promotion, a historic night at Bellator 238. Both fighters traded kicks early, but Daniels soon asserted his distance and timing. King then began going for takedowns but to no avail. The last attempt proved to be fatal, as Daniels stuffed a single-leg attempt and landed punches that stunned King. Daniels continued punching until the referee stopped the fight.

In a bantamweight fight between a former featherweight and a former flyweight, the flyweight showed that size does not always win fights. Former UFC staple Sergio Pettis set the pace early with a lot of movement and maintained distance by throwing a lot of kicks. His opponent, Dana White’s Contender Series alumnus and Glendale Fight Team product Alfred Khashakyan, applied pressure but seemed reluctant to throw strikes. When he did, Pettis was always right there with a counter, and that proved to be the downfall of “The Fearless” Khashakyan. During the final exchange, Pettis slipped a Khashakyan punch and then landed flush with a right hand of his own a half-second later. The punch dropped Khashakyan, who then was put in a guillotine choke. The choke quickly put him to sleep, earning a win and a Brazilian Jiu-Jitsu black belt for Pettis as a result.

Sergio Pettis wins by submission (guillotine choke), 3:00 of Round 1

Pettis’s Bellator debut proved to be a success, moving his record to 19-5. Khashakyan meanwhile moved to 11-5 after the loss.

In a hotly-contested matchup, it was the recent title challenger who emerged victorious. Both fighters were coming off of a loss in the first round of the Bellator Featherweight World Grand Prix and were eager to get back in the win column. While Juan Archuleta applied an attack based on movement and volume, Henry Corrales moved forward with pressure and power shots. Most of the action occurred in exchanges, with both fighters throwing at the same time. Neither particularly got the better of each other in most exchanges, making the fight hard to judge. The general consensus was that Archuleta secured the second round with a takedown and control and that Corrales got the third round by applying more and more pressure. The real question was who won the very close first round, but all three judges decided to give it to “The Spaniard”.

Archuleta improves to 24-2 with the win, while “OK” Corrales has dropped two in a row with a new record of 17-5.

National champion wrestler and former Bellator bantamweight champion Darrion Caldwell got a takedown roughly a minute into the fight, and the rest was history. He threw a jumping kick at Adam Borics and shot for the takedown after missing. Caldwell held the position before Borics got to his knees against the cage. Caldwell, however, was able to get behind “The Kid” and take his back after throwing a few punches and elbows. Shortly after that, Caldwell was able to wrap up a rear-naked choke and get the tap.

Darrion Caldwell wins by submission (rear-naked choke), 2:20 of Round 1

If this doesn’t get you hyped for @TheWolfMMA vs. @AJMcKee101, I don’t know what will. pic.twitter.com/SnI4vLqbwo

Caldwell moves on to the semifinals of the Bellator Featherweight World Grand Prix, and will face the undefeated phenom AJ McKee. His record moves to 15-3, while giving Borics his first career loss at 14-1.

In a battle of women’s MMA legends, a new champion emerged in dominant fashion at Bellator 238. Cris Cyborg, the former Strikeforce, Invicta FC, and UFC women’s featherweight champion, can now add Bellator to her laundry list of organizational titles.

Cyborg seemed to beat Julia Budd to the punch from pillar to post, as is often the case in her fights. Cyborg utilized combinations, takedowns and subsequent ground-and-pound, and clinch work to punish “The Jewel” anywhere the fight took place. The end almost came at the end of the third round, with Cyborg raining down big punches from the mount in the final seconds. As the next round began, she must have sensed the end, as she came out guns blazing for a finish. She then got it after a devastating flurry, forcing Budd to crumple over after a body shot and making referee Mike Beltran step in to stop the fight.

In Cyborg’s Bellator debut, she becomes the new women’s featherweight champion and moves her record to 22-2. Budd snaps an eight-year winning streak, moving to 13-3.

Bellator returns on February 21 with Bellator 239 in Thackerville, Oklahoma. It will feature a welterweight headliner between Ed Ruth and Yaroslav Amasov.