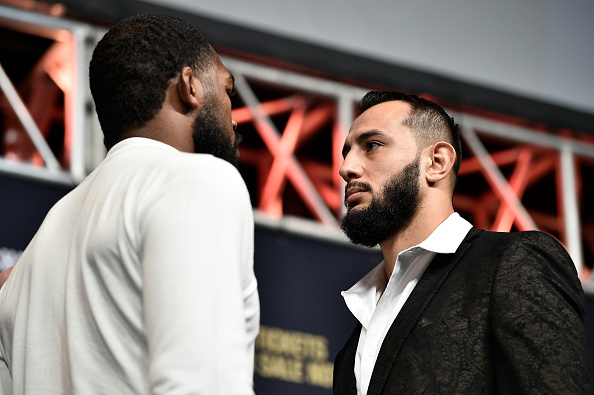 MMA Must-See TV is a new series we’ll be publishing on a monthly basis. With so many promotions running so many cards these days, good fights sometimes fly under the radar. There’s a myriad of content vying for your viewership and each month we’re going to take a look at fill you in on some fights you won’t want to miss. Some will be obvious, like UFC PPV main event obvious, but some might be on cards you’re not familiar with or would otherwise see.

Where’s it going down: Toyota Center in Houston, TX

How to watch: Exclusively on ESPN+ PPV

Why you’ll want to watch: This fight is MMA must-see for one reason. Two words, Jon Jones. When he fights you’re going to want to make sure you check it out. He is more or less undefeated, sans a controversial “loss” via DQ back in the day to Matt Hamil. All he does is win. He fights the best of the best and simply delivers time and again. Jones hasn’t looked as dominant in his last two fights. “Bones” won a very close split decision over Thiago Santos who was on two bad wheels for the fight. It makes his title defense against Dominick Reyes more exciting.

In Dominick Reyes, you have an undefeated fighter who has nine first-round stoppages in twelve career wins. He’s a finisher. He’s also confident which is somewhat contagious. You almost believe him when he says he can and will win this fight. Of course, don’t go all-in, we’ve heard plenty of fighters say they have Jones’ number only to taste defeat at his hands.

I love this fight but worry about the seemingly insurmountable reach advantage Jon Jones has. He always has a reach advantage, with a remarkable 84-inch wingspan. He uses that reach as well as his long legs to his advantage. This fight has the makings to be a competitive clash, but when it’s all said and done, it’s hard to not bet on Jones.

Where’s it going down: Memorial Hall in Kansas City, KS

How to watch: UFC Fight Pass

Why you’ll want to watch: One reason is that Pearl Gonzalez is a savage. She’s a very talented fighter and I watched her compete and the Combat Jiu-Jitsu Worlds and she brutally snapped Lilian Marquez‘ arm with an armbar. She’s won four of her last five MMA bouts and is a lot of fun to watch. She will stand and trade but truly excels on the mat when she’s able to grapple. It’s a big fight for her in Invicta and for that reason, it’s worth watching.

On the other side of the cage is Miranda Maverick. Like Gonzalez, she enters this fight having won four of her last five. She’s only 22 years old and already is making waves in the sport. She lost to DeAnna Bennett at the start of 2019 but avenged that loss when she submitted Bennett in September. She’s an up and coming fighter who has really good submissions.

Where’s it going down: Roseland Theater in Portland, OR

How to watch: UFC Fight Pass

Why you’ll want to watch: SUG is a lot of fun to watch in general. If you’ve not seen it, check it out. It might not technically be MMA, but it’s MMA fighters. So we’ll include it. That said, it’s always fun when two UFC fighters meet outside of the Octagon. Mike Perry and Al Iaquinta will meet in what is shaping up to be a bit of a grudge match. There are other fun fights on the card as well. Mike Perry is a dog, and he’ll fight anyone at the drop of a hat. He had one grappling match that I’ve been able to see when he defeated Gabriel Napolitano via points.

What can you say about “Ragin” Al Iaquinta? The guy is an absolute animal. I’ve not seen Iaquinta grapple before in a match, but he trains with Matt Serra and you know he can grapple. Despite his training, he does only hold three wins via submission in his entire career. We know he loves to throw down, but that won’t be an option against Perry in Portland.

I don’t know what to expect from this one. The unpredictable nature of the fight, paired with the explosive nature of the fighters, makes it exciting. I think Perry will be the bigger of the two and most likely has a strength advantage. I could see this dissolving into a debacle complete with punches and whatnot. It’s another reason I’ll be watching. I’d have to lean towards Perry here, but who knows?

How to watch: Exclusively on ESPN+

Why you’ll want to watch: Michael Pereira has won three of four and those three wins come by first-round stoppage. He’s an absolute treat to watch as he always shows up ready to wage war. He lost his last bout against a very game Tristan Connelly but will be looking to rebound. One thing is for absolute certain, “Demolidor” will have a willing partner in violence to throw hands with Diego Sanchez.

Speaking of crazy, savage, would-be killers, Diego Sanchez is always on full berserker mode. Dude is all kinds of crazy and always shows up ready for battle. He’s been around since TUF 1 and shows no signs of aging despite the many epic bloodbaths he’s competed in. Anytime Diego Sanchez enters the Octagon, for me at least, it’s must-see! This is no different.

These two are going to go at it full-tilt. I have no doubt this is fight of the night material and might just be the most exciting fight to take place all month. It’s going to be that good. I’m expecting a knock-out, I’m just not sure who’ll be sleeping. My head tells me Diego might be in trouble, but my heart is always team Nightmare. Diego by KO!

Where’s it going down: Chartway Arena in Norfolk, VA

How to watch: ESPN+

Why you’ll want to watch: First things first, it’s a leap year and that’s why we’re blessed with this fight in February. When I look at the calendar this is probably what I expect to be the best and most competitive fight of the entire month. Joe Benavidez is a stud, and a win here gets him a title shot. He’s lost only one fight in the past six years and it was a close split decision against Sergio Pettis. The only other losses in his illustrious career are against Demetrious Johnson and Dom Cruz. The Team Alpha Male flyweight ranks among the elite in the sport.

Deiveson Figueiredo is an elite-level talent who will be stepping up big time into the spotlight here. A win almost certainly gets him in the hunt for a title shot. He lost a tough fight with Jussier Formiga but bounced back with wins over Alexandre Pantoja and Tim Elliott. Figueiredo is a well-rounded fighter and has won both by striking and submissions. He’s going to have to be at his best to beat Joe Benavidez.

I love this fight and I’m leaning towards Joe Benavidez as he has more experience and has fought the better competition. I am not sleeping on Figueiredo though and I know he has the necessary tools to earn the victory. Going with Benavidez but it’s going to be a fun fight.