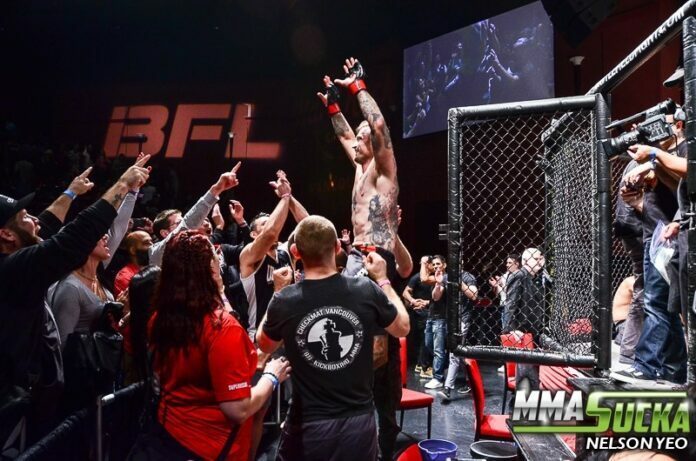 Battlefield Fight League heads to the Vancouver Convention Centre on Saturday, February 8th to bring BFL 65 A New Era. With three professional title fights on the line and a number of other top-quality MMA fights throughout the night, this could be the top Candian MMA card in 2020. Here are some of the top fights at BFL 65.

Ali Wasuk is 2-1 as a professional and most recently defeated Tylor Nicholson via rear-naked choke back at BFL 63. Wasuk fights out of Tristar Vancouver and is ranked #4 in the BFL bantamweight rankings. Riding a two-fight win streak Wasuk could potentially earn a title shot with a victory.

Nick Ghaeni is coming into BFL 65 with a 3-3 record. His last fight came back at BFL 56 where he was submitted by Gagan Gill via rear-naked choke. Ghaeni fights out of the UFC Gym in Vancouver. He has wins over names like Jamie Siraj, Craig Maclean and Cody Purtell.

This is a tough fight to predict an outcome on, but if Wasuk is able to take Ghaeni to the ground we could see him leaving the cage with a submission victory.

Battlefield Fight League will make history on February 8th as they will be handing out their first-ever women’s title. The fight will be between Jamey-Lyn Horth and Jade Masson-Wong. Horth is 3-0 and last fought at TKO 48 where she was able to come out with a rear-naked choke victory over Corinne Laframboise. All three of Horth’s victories came from a finish, expect nothing less in this fight.

Masson-Wong has a record of 4-1 and will be making her first appearance with BFL. The previous fights for Masson-Wong were all done under the TKO promotion. Like Horth, Masson-Wong also has a victory over Corrine Laframboise. Masson-Wong suffered her first loss in her last fight when she was submitted by Mandy Böhm at TKO 48.

Both fighters want to earn the championship gold and prove they are ready for the next step. It is unlikely we will see the judges in this fight, with Horth being too much for Masson-Wong and becoming the first BFL women’s 135lbs champion.

The BFL middleweight champion Jared Revel is back to defend his title as he is set to take on Drayton Angus at BFL 65. Revel will enter the cage on a four-fight winning streak, three of those wins coming from a finish in the first round. The BJJ blackbelt made his last appearance in June of 2019 at BFL 61 where he won a majority decision over TUF 17 veteran Colin Hart. With a record of 9-2 and five submission victories, Revel could potentially sign with the UFC or another big organization after this.

Angus is making his first appearance with the BFL. The last time Angus stepped in the cage was back at Modern FC 5 where he was submitted in the first round by Rafael Palomeque. The 33-year-old has a record of 7-9 with five career knockouts.

Angus is a brawler with a punchers chance in this fight. But, we could see Revel coming out on top with a submission victory in the first round.

The main event of BFL 65 will have Dejan Kajic defending his super-welterweight title against Julien Leblanc. Fighting out of Universal MMA Kajic will walk to the cage riding a four-fight winning streak, all of them ended in a knockout. A total record of 12-7-2 and 1 NC, Kajic has seven knockout victories and has shown he is one of the best in Canada.

This is easily one of the top fights at BFL 65. Both fighters have shown they have impressive knockout power. This would be a huge win for Leblanc if he can pull it off.  Kajic’s power will be something Leblanc hasn’t seen before, leading to a Kajic win via knockout in the first round.

Keep it locked to MMASucka to see if these top fights at BFL 65 live up to the hype.