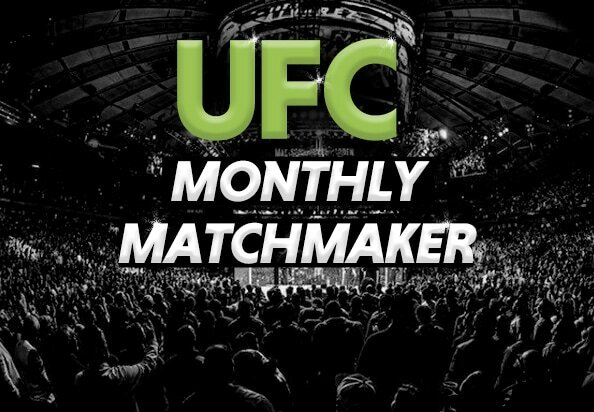 In the second instalment of the UFC Monthly Matchmaker of the year, we take a look at possible match-ups for Sodiq Yusuff, Holly Holm, Arnold Allen and Curtis Blaydes.

‘Super’ Sodiq Yusuff is one of the hottest prospects in the UFC’s featherweight division. Sitting 11-1, with a UFC record of 4-0, Yusuff is certainly one to keep an eye on. With devastating knockout power, and an impressive ground game, Yusuff is a problem for anyone at 145lbs. After defeating Andre Fili at UFC 246, Yusuff is certainly a fringe top 15 guy. To break into the rankings, Yusuff needs to defeat a ranked opponent next.

Shane Burgos is #12 and riding a three-fight winning streak. His only amateur or professional loss came at the hands of Calvin Kattar in 2018. Burgos is known for his cardio and with Yusuff certainly being one of the bigger featherweights, we could see him tested late on in the fight if these two were to be matched up.

In his fight against Fili, Yusuff lost the final round on all cards, potentially bringing into question his endurance. This would provide a match-up between two up and comers and would allow one to solidify their place in the featherweight top 15.

Former champion and three-time title challenger Holly Holm picked up her first victory at UFC 246 after being finished by the champion in her last outing. She defeated Raquel Pennington in a fight which was mostly fought in the clinch. Holm used her superior strength to determine where the fight took place, allowing her to cruise to a unanimous decision win. If this is any indication as to how Holm’s career has gone, she will be getting a title shot soon. Twice she has competed for a belt following just one prior victory. In this case, a title shot shouldn’t materialise.

Her next fight should be against either Irene Aldana or the winner of Aspen Ladd and Juliana Pena.

Aldana is coming off the biggest victory of her career, where she brutally knocked out the undefeated Katlen Viera. Aldana is 5-1 in her last 6, only losing a split decision to Pennington. In this run, she’s notched two finishes and defeated two opponents who missed weight (both by 5+ lbs). Many are calling for Aldana to get a title shot at Amanda Nunes and with a win over the veteran Holm, it would be hard to deny her this.

Aspen Ladd vs Juliana Pena goes ahead at UFC on ESPN 8 in March. Ladd is 9-1 in her career, bursting onto the UFC scene with a bang. Her lone loss came in just 16 seconds in her first main event. Since then, she TKO’d Yana Kunitskaya, becoming only the second fighter to do so, the other being Cris Cyborg.

Pena is very much the forgotten entity at 135lbs. The Ultimate Fighter season 18 winner went on a four-fight winning streak inside the octagon. Although this ended against Valentina Shevchenko, Pena has always been a threat. Having taken time away from the sport to start a family, Pena returned in 2019 against former flyweight champion Nicco Montano. Pena gained the unanimous decision victory on the night. The winner of these two ladies should face Holm, with the winner of that fight potentially realising a title shot in 2021.

Britain’s own, Arnold Allen picked up his seventh consecutive UFC win at UFC on ESPN+ 24. He’s the owner of the second-longest active winning streak at featherweight, behind only the champ, Alexander Volkanovski. Often criticised for being ‘too technical for his own good’, Allen certainly hasn’t proved that he’s a finisher in the UFC. Only finishing two of his seven UFC wins, Allen definitely knows how to outpoint his opponents.

Who to match him up with next? Ranked #15, Allen deserves a top ten opponent. He was supposed to fight Josh Emmett in Raleigh. This is the fight that needs to be rebooked. It was a fight that excited fans and made a lot of sense. Emmett would provide Allen with a style he is yet to see in the UFC and would ask alternative questions for Allen to have to answer.

If the UFC chooses not to go this way, book the Shane Burgos scrap. Although I suggested Yusuff should face Burgos, Allen vs Burgos could also work.

Whoever Allen faces needs to be of a higher ranking. He deserves it, he’s earned it, now the UFC have to make it happen.

Perennial UFC heavyweight contender Curtis Blaydes continued his march towards a title shot with a win over top 5 ranked Junior Dos Santos. In his main event slot at UFC on ESPN+ 24, Blaydes showed an improved stand-up game. Many thought that it would be the Brazillian’s boxing that took charge on the feet, with Blaydes dominating the wrestling realm. Unable to score a takedown in the fight, Blaydes adapted and finished it on the feet in the second round.

So, who is next for #3 Curtis Blaydes? The problem for Blaydes is that the heavyweight division is very much booked up. Champion, Stipe Miocic is struggling with injuries. His return will likely see him face former champion Daniel Cormier in a rubber match.

Blaydes has notched two losses against #2 Francis Ngannou in two attempts. Ngannou is also booked against #5 Jairzinho Rozenstruik. This means that Blaydes will have to fight someone lower in the rankings unless he wants to sit out for a prolonged period of time. If he doesn’t want to sit out, Blaydes should take on Alexander Volkov, which would certainly be a main event of a fight night card. Volkov was one minute away from a title shot in 2018 when he lost against Derrick Lewis. ‘Drago’ returned against Greg Hardy, outpointing him on the way to a comeback victory.

Volkov is the fight to make for Blaydes, that is unless Rozenstruik beats Ngannou. If this is the case, Blaydes vs Rozenstruik in a #1 contenders fight makes a lot of sense.