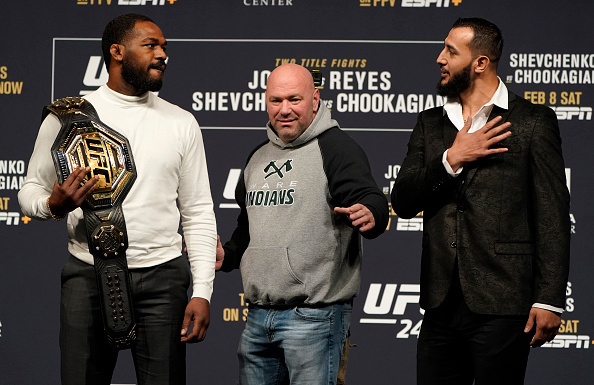 It’s time for Making the Grade: UFC 247. Last time we took a look at UFC 246 and this time, it’s UFC 247.  Grades are given under various criteria including potential for violence, name value, anticipation value and what the fight means for the division going forward. Jon Jones is the headliner of this card so it’s going to be a big draw. Once the gloves are on, he’s among the best to ever do it.

Dominick Reyes is a super talented fighter who brings with him a legitimate chance at upsetting the champion. Jones has looked beatable at times in his past couple of fights and Reyes is a strong kid with a ton of talent and striking prowess. It makes it a very interesting fight, and thus one you’re not going to want to miss.

Derrick Lewis (22-7) is wildly popular and there are multiple very good reasons for that. Number one, he’s hilarious. The guy just gets it. He knows how to sell himself and market himself to the masses. Secondly, and perhaps more importantly, he can knock anyone out with one punch of either hand. He’s unbelievably heavy-handed and can end a fight on a moment’s notice. He’ll have a willing partner in Ilir Latifi.

Ilir Latifi (14-7) has a nickname that fits like a glove. He’s known as “The Sledgehammer.” That’s exactly what his hands are.  That said, he typically fights at 205 pounds and will be stepping up to heavyweight for this fight. Derrick Lewis might not be the right guy to test yourself against a new weight. Lafiti enters this fight having lost two consecutive fights. He’ll be giving up seven inches in height and nearly five inches in reach to Lewis. This could be a long night for Lafiti.
From a rankings standpoint, this fight isn’t a big impact fight. Lewis is ranked sixth in the heavyweight division while Latifi is ranked 12th at light heavyweight.
This fight is a good choice to kick off the main card. It will likely end via stoppage; it simply isn’t going the distance. Fun fight, but not terribly important in terms of rankings and anticipation.
Grade: B-

Dan Ige (12-2) is a good featherweight talent who flies a little bit under the radar. This is a good opportunity for him to get on the main card and get some eyes on him. He comes into this fight having won four consecutive fights. For that reason, this is going to be a very important fight for him. With a victory, he’ll break into the rankings, possibly the top ten and get himself a big opponent on a future card.

Mirsad Bektic  (13-2) had what many felt were both the fight of the year and the comeback of the year in 2017 in a war with Darren Elkins that saw him win the fight late in the third after being battered for the better part of twelve minutes. For that reason alone, he has become a draw. He comes into this fight on the heels of a stoppage loss to Josh Emmett in the first round of their fight. He’ll be looking to rebound against Ige.

Neither fighter is ranked heading into this fight which makes it a bit of a head-scratcher as to why it’s featured on the PPV section of the card. It does have the potential to be a fun fight, though.

Again, you don’t normally find two unranked featherweights on the main card of a major UFC PPV event. That said, both guys are talented and it could well end up being a fun, competitive fight. It’s an average fight.

Justin Tafa (3-1) packs some serious power, but there is a wonder about something heading into this fight. Why is he on the main card of a UFC PPV? He was 3-0 when he got the call into the big show. That said, in his debut in the Octagon he was knocked out in the first round by Yorgan De Castro. Why is he again being featured on the main card?

Juan Adams (5-2) is another fighter who probably shouldn’t be on the main card of a PPV. He’s lost two consecutive fights, including a clubbing stoppage at the hands of Greg Hardy. The fight seems odd, but it could be just a chance for the UFC to feature a fight that will likely produce a knockout. Adams has a massive reach advantage heading into this fight with Tafa. He will need to use that to keep Tafa at distance. If he does so, he’ll win the fight. If not, he could get slept.

Neither fight is ranked and a win here won’t have either cracking the top fifteen. This is just a fight being tossed out there to try and produce the desired outcome, a knockout. If this somehow goes to the judges, you can bet the UFC will be pulling their hair out.

This isn’t a great fight, especially being on the main card. Fans aren’t necessarily opposed to seeing average fighters try and sleep each other, but this card seemingly deserves better.

Valentina Shevchenko (18-3) has blossomed into a legitimate superstar. She’s a tremendously talented fighter and fans have really begun to respond to her. She’s won four bouts in a row since her loss to Amanda Nunes at UFC 215 via split decision. It’s a fight a lot of people felt she’d won. In fact, MMA pundits were split right down the middle on who they felt had won. Her MMA game is complete but her standup is downright scary.

Katlyn Chookagian (13-2) is a really good fighter in her own right. She has worked hard to earn this title shot and she’ll show up ready to fight. She’s won two in a row since losing to Jessica Eye via split decision. “Blonde Fighter” was also been beaten by Liz Carmouche. Carmouche was just beaten by Shevchenko. Chookagian is game, but she’s just outgunned here in this fight.

This is another title fight, so of course, it’s big in the rankings. Chookagian enters the fight ranked number one so she’s more than deserving of her title shot.

In terms of grading this fight, it’s must-see. Valentina Shevchenko is a superstar and it is a joy to watch her compete. You’ll want to see this one.

Jon Jones (25-1) is for all rights and purposes, an undefeated fighter. Yes, he has a loss on his record, but it’s due to a questionable disqualification for elbows. Technically, Matt Hamil does hold a career victory over Jones. Since that “loss,” “Bones” has been perfect. Jones has beaten some of the best in the division, running off 16 straight wins. That said, in the cage, he’s as good as it gets and fans tune in when he fights.

Dominick Reyes (12-0) is undefeated but not nearly as battle-tested as Jon Jones. He stopped former middleweight champion Chris Weidman and Jared Cannonier both in the first round and won decisions over Volkan Oezdemir and Ovince St. Preux on his way to this title shot. He’s looked really sharp, but some wonder if this is a case of too much, too soon. Time will tell.

In terms of rankings, it’s a championship fight so of course, it matters. Reyes is ranked fourth in the light heavyweight division. He will become a mega-star if he wins Saturday night.

Jon Jones is must-see tv and Dominick Reyes presents a game opponent and that adds to the excitement. Whether or not he can pull off the upset and defy the odds remains to be seen. A lot of people will be seeing this fight.

The grade for the entirety of the UFC 246 PPV: C