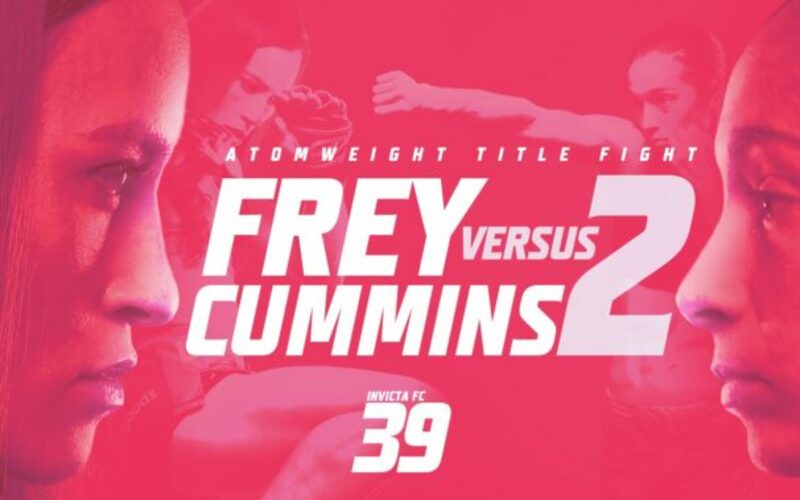 Invicta FC 39 goes down tonight and it’s going to be an intriguing night of action. There are a total of seven fights on the card. You can watch the action live on UFC Fight Pass beginning at 5:00 PM PST. If you can’t make it there, we’ll have live results and recaps as they happen.

In the feature bout of the evening, Jinh Yu Frey was set to defend her atomweight title against Ashley Cummins but lost the strap on the scale when she missed weight for the main event bout. Now, if Cummins wins the bout, she becomes champion while a victory for Frey would see the belt remain vacant. It’s not a great situation, but it’s where we find ourselves.

In the co-main event, Miranda Maverick and Pearl Gonzalez will square off in a super exciting fight. Both fighters are very talented and this fight was one we featured in an article earlier this month about five must-see fights.  These are two talented grapplers and this one could be a barn-burner.

The two fighters met in the middle of the cage and started throwing hands. The two clinched and Ashley Cummins landed a couple of knees. They broke the clinch and returned to throwing hands in the center of the cage. Cummins attempting some kicks, but nothing damaging landed. Cummins landed a straight right hand. Ashley Cummins was the more active fighter and won the first round based on that and some decent strikes landed.

Ashley Cummins again landed some solid shots and looked to be getting the better of the striking exchanges. After a clinch alongside the fence, Cummins lands a big elbow on the break. Frey is starting to show some damage to her left eye. Frey is attempting some wild right hands but they are not close to landing. Cummins has a cut on her right eye after the two fighters clinch. Frey dropped Cummins momentarily with a right hand. Close round, I gave it to Frey.

This is the third of a planned five rounds. Both fighters traders shots to open the round, with Cummins landing a nice right hand. Both fighters seemed happy to stand and trade for much of the round, but Cummins was the more aggressive of the two. There was not a ton of damage this round, but Cummins won it on my card with her stalking approach, always moving forward. Two rounds to one for Cummins.

Round four opened the same way the third ended, with both fighters trading shots in the center of the cage. Cummins spent more time coming forward, but Frey enjoyed some counter shot success. Both fighters seem to be in great shape as the pace hasn’t slowed down a bit. Ashley Cummins is landing more strikes, but Frey lands the heavier shots. Frey landed a pair of solid left hands, but Cummins answered back with a flurry of her own. Close round. Good fight. I’ve got it 3-1 Cummins but who knows how the judges are scoring it.

The final round opens and the fighters were again in the center of the cage willing to slug it out. More of the same here, as Cummins landed more strikes, and Frey landed the bigger strikes. Frey very nearly landed a big knee. This has been a heck of a fight. With a minute left, they upped the pace even more. Frey landed a big left hand. I gave the final frame to Frey but scored the fight 48-47 for Ashley Cummins. What a fight!

The bell rang and this one was underway. I’ve been amped for this fight for nearly a month. The fighters exchanged shots standing, including body kicks. Pearl Gonzalez overextended on a right hand and Miranda Maverick shot in and scored the takedown. Maverick passed to side control. Miranda Maverick took Pearl Gonzalez’s back and sunk the hooks.  Maverick controlled the action and landed some big strikes as well. She was able to apply a choke, over the chin and Gonzalez survived and took top position. Gonzalez closed the round with some ground and pound, but I scored it 10-9 for Maverick.

Pearl Gonzalez landed partially with a spinning back fist, but Miranda was able to clinch and take Gonzalez down. Side control from Maverick and she utilized the position to land some big knees. Gonzalez managed to get to her feet but was the victim of a big slam by Maverick. Miranda Maverick kept Gonzalez down and controlled the remainder of the round, winning it on my scorecard. I’ve got it 30-27 for Miranda Maverick. Great fight.

Alesha Zappitella landed some solid shots to open the fight and was pressuring D’Angelo as well. “Half-Pint” utilized fast hands and worked in and out to land the telling strikes against D’Angelo. Zappitella is a fantastic wrestler and her hands seem to be catching up with that aspect of her game. Kelly D’Angelo looked off balance and uncomfortable at times in the first round. I scored it for Zappitella, 10-9.

Alesha Zappitella changed it up and scored a takedown to open the second round. She spent time in D’Angelo’s closed guard and attempted elbows. Kelly D’Angelo utilized an active guard from the bottom but wasn’t able to secure any dangerous submission attempts. Zappitella was able to pass to the side and controlled much of the action. The fighters got to their feet with a minute or so left in the round and nothing too compelling took place. Another 10-9 round on my scorecard for “Half Pint” Zappitella.

As the third round opened, D’Angelo landed a kick that grazed the head of Zappitella, who immediately shot in for the takedown, ending up in the half guard. D’Angelo able to get to her feet. D’Angelo nearly scored a head kick, but it went just wide. “Wildfire” landed a straight right hand that seemed to stun Zappitella. The two stood and slugged it out but neither fighter was able to land a telling shot that hurt the other. D’Angelo stuffed a takedown at the bell and might have done enough to steal the round. I’ve got it 29-28 for Zappitella.

Erin Blanchfield def. Victoria Leonardo via TKO (Head kick) at 2:06 of Round 2

Erin Blanchfield and Victoria Leonardo throw some shots back and forth to start the round. After a brief tie-up, Erin Blanchfield lands a GIGANTIC head kick that drops Victoria Leonardo to the canvas, hard. It looked like it could be over, but somehow Leonardo survived and managed to stay in the fight. She was able to get to her feet and control the clinch and land some shots to close the round, surviving another kick at the buzzer. 10-9 for Blanchfield. Not sure how Leonardo stayed in that fight.

The two atomweights came out striking early and almost immediately found their way into the clinch along the fence. Jillian DeCoursey scored the trip takedown. Mihalec got up but DeCoursey held onto her neck. Mihalec gained the top position. DeCoursey began looking for the sweep and was able to use the arm for the sweep. Mihalec was again able to get to her feet. Nice series of knees by DeCoursey. Good back and forth round. DeCoursey scored another takedown and landed some solid ground and pound. “Lionheart” won the round on my scorecard 10-9.

DeCoursey pumps out a quick, accurate jab to start the second round. Jillian DeCoursey is landing some telling strikes here in round 2. Linda Mihalec lands an overhand right but it was one shot. They tied up against the fence and DeCoursey began searching for a takedown. DeCoursey landed another big right hand and seems the better striker. DeCoursey scores a takedown and gets to side control. “Lionheart” is beginning to take control of the fight over Mihalec. Jillian DeCoursey controlled the action for the remainder of the round and took it on my card, 10-9. She leads going into the third round.

Linda Mihalec showing some urgency to open the third. Mihalec lands some decent shots and earns the takedown. DeCoursey able to get to her feet, but is again taken down. Mihalec gets around the back but DeCoursey tries to turn into Mihalec and she manages to do so. DeCoursey is able to pass to half guard. Some solid grappling and sweeps from both fighters. Fun fight, good grappling. I’ve scored it for DeCoursey.

Tina Pettigrew ate some shots as she continued to move forward. She was taken down and Monica Franco managed to take her back momentarily. Tina nearly had an armbar but Franco was able to defend. A flurry at the end of the round by both fighters. Close round, advantage Pettigrew due to pressure and control.

Both fighters again landed shots in the first minute of the round. Franco seemed more damaging. Pettigrew doing a lot of walking Franco down, but Franco counters with a few jabs and low kicks. Franco lands a solid combination culminating with a body kick. A bit of a lackluster round, I scored it for Franco.

Tina Pettigrew shoots for an immediate takedown to open the third, but it was well defended by Franco. The two fighters were clinched against the fence for a bit and Franco landed some solid punches. Franco continued to elbow and punch the side of the head while in the clinch. They remained clinched for the entirety of the round and the referee seemed happy to leave them there. Not super compelling for the fans, however. I scored the round and the fight for Monica Franco.