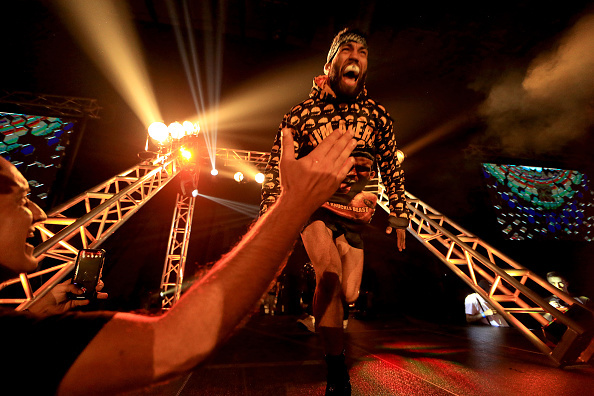 Jim Alers is a budding superstar for Bare Knuckle FC. He’s 3-0 with three knockouts inside the BKFC ring and will look to keep that rolling Saturday night. He is going to be taking on Kaleb Harris at BKFC 10. Harris enters the fight having won two straight, both via knockout in the Bare Knuckle FC ring. The fight takes place as part of the lightweight tournament. In his last outing, he defeated Julian Lane.

Harris has a solid skill set, but it’s not anything Jim Alers hasn’t seen before.We spoke about what issues Harris could present. “He has a similar style as I do. He likes to come forward and stay in your face. I haven’t had anyone really who’s done that back to me.” He’s anticipating fireworks. “I think it’s going to be an interesting matchup. It’ll be like an explosion in the middle of the ring. It’s going to be fun and exciting.”

Whoever wins this tournament will become BKFC’s inaugural 155-pound champion. It’s an accolade that Alers could own alongside his 2019 BKFC fighter of the year award. When you look at potential advantages Alers has, one is pretty clear. He spoke on his advantage with experience. “Is it anything I haven’t seen before? I don’t think so. This is my twenty-third professional fight. I’ve seen it all. This is like his fifth professional fight ever. I think my experience is going to be a big factor.”

Alers isn’t looking past his fight with Harris, but he does want to stay involved in all aspects of combat sports. He wants to continue to fight MMA and grapple. He has a lot of irons in the fire. “I want to be a jack of all trades, and stay busy. If it is a fight that interests me, I’m going to do it. Be it bare-knuckle, MMA or Jiu-Jitsu. Like I tell people, if it’s an arm-wrestling match that interests me, I’m going to jump to it. I just want to compete and stay busy.”

Jim Alers is the former Cage Warriors featherweight champion and defended his title successfully multiple times before moving on to the UFC. He recently tweeted about a potential fight with Paddy Pimblett in Cage Warriors. That could be a fun fight as well.

Heard @CageWarriors wants to know who @PaddyTheBaddy should fight next hmmmm ?

Who’s on the horizon?

When askedabout who he might be interested in fighting in BKFC who isn’t currently on the roster, Alers had a quick reply. “I kind of want to make this fight happen. I got called out the other day by Ross Pearson. He put out a post that Bare Knuckle posted that said, ‘hey give me a shot at Jimmy.‘” The two are not strangers. In fact, long ago they trained under the same roof.

“I trained with Ross Pearson many years ago, many, many years ago, I think I had one professional fight. He was getting ready for the Ultimate Fighter finale and he was at my school kind of polishing up his groundwork. It’s been a long time since we trained. He has twenty-something UFC fights and I think that’d be a good fight to make. I’d be interested in something like that.” I am sure the fans would be interested in that as well.

Irons in the fire…

If you’re wondering what else Jim Alers is up to, he’s got a lot of irons in the fire. “I’m a chill guy, when I’m not at the gym I’m at home just with my family enjoying time with them. Working on projects. I’m into making things with pallet wood.”  Just trying to stay busy and not just be good at one thing,” he continued.

“I’m always learning, trying to study business and grow my gym. I am just a very busy person. Between that and I work with Combat Night, one of the biggest promotions here in Florida with match-making there. I just try to stay busy man, I have long days, early mornings and late nights.” If you want to keep up with Jim Alers, check him out on Instagram. You can follow him here, and follow his MMA Team here.

Jim Alers will be fighting in the quarterfinals of the Bare Knuckle FC lightweight tournament. You can catch all the action at Fite.tv and follow the live results and recaps here at MMA Sucka.