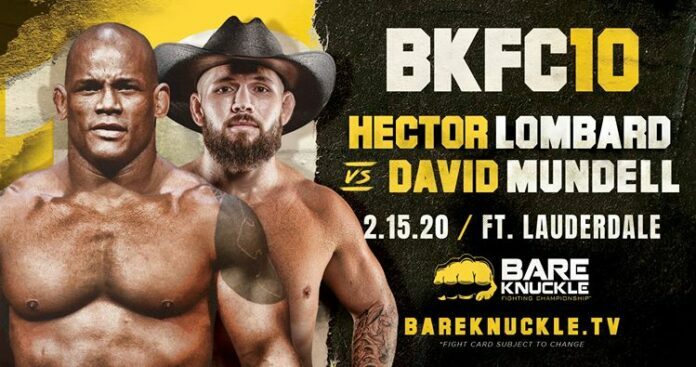 BKFC 10 is taking place Saturday night and I’m amped and ready for some incredible action. It’s no secret that I love Bare Knuckle FC, and this is a loaded card that will undoubtedly provide fireworks. The event takes place in Fort Lauderdale, FL and there are plenty of fighters representing the sunshine state. You can see the recaps of the last event right here.

In the feature bout of the evening former UFC mainstay and athletic freak, Hector Lombard will make his BKFC debut. He’s got a tough draw in his first fight with the organization with David Mundell. Mundell is 2-0 inside the BKFC ring and won both fights via first-round stoppage.

In the co-main event, we’re going to get nonstop action when Jim Alers faces off with Kaleb Harris. Both fighters are pressure and in your face type fighters who have five wins and five knockouts combined in their past five outings. Expect a knockout here as well.

This is going to be a fun fight. It should be interesting to see what Lombard brings to the world of Bare Knuckle fighting. He’s always been heavy-handed and athletic, but this is a new world, and it remains to be seen what he brings to the table. He’s been staying sharp recently grappling. His MMA career more or less ran aground after he lost his sixth consecutive MMA fight in September of 2018.

David Mundell took the fight, stepping in for an injured Joe Riggs. He’s 2-0 in BKFC and won both fights via first-round knockout. He’s heavy-handed and will be looking to welcome Lombard to the BKFC with another stoppage. He’ll have the main-event spotlight on him, and if he is able to win, it’s a big name to put on his resume.

I think this has the potential to be a fun fight. When it’s all said and done, I’m expecting the upset from Mundell here. I think he has an edge in boxing experience and he will land the damaging shots that sway the fight. It could well go the distance, but I’m going with Mundell via TKO.

Jim Alers is a great fighter, and he never steps back. He’s all about pressure and staying in your face. He hits like a brick and will not give you a moment to reset or recover. He’s just always there, delivering damaging shots. I spoke to him this week about this fight and you can see what he had to say, here. Alers is 3-0 in BKFC with three knockouts. He was named the BKFC 2019 Fighter of the Year, rightfully so.

Kaleb Harris has looked really sharp in his last two fights. He won both via knockout and like Alers, likes to pressure his opponents. He will stand and trade with anyone, and while that makes for fun fights for the fans, it’s a dangerous game to play with Jim Alers.

This fight is on my shortlist for the fight of the night. These guys are not going to hide and will be right there in front of each other for as long as it lasts. I think Alers has the edge in power and will advance in this lightweight tournament by knocking out Harris.

Lorenzo Hunt will be making his second appearance in the BKFC ring. He stopped Reggie Pena in his debut, via stoppage in the second round back at BKFC 8. He looked sharp in that performance and will be looking to earn another win this Saturday night. He’ll be facing another Florida fighter in Trujillo so there should be plenty of interest for this one.

Gustavo Trujillo is a product of the American Top Team is also making his second appearance in the BKFC ring. He fought on the BKFC 8 card as well as Hunt and won via first-round knockout against Rob Morrow. He showed great power in collapsing Morrow with a single right hand.

This is an important fight for both guys who are trying to establish their footing in the organization. Whoever wins puts themself into a potential big fight in the organization. I like this fight, and I feel like Trujillo has the power to win this one. It’s going to be fun, and I’m going with Gustavo Trujillo.

Abdiel Valazquez has a BKFC record of 3-1. His lone loss is to champion Johnny Bedford. In his last outing, he stopped Rick Caruso and looked sharp in doing so. He utilized great hand speed and landed some jabs and straight lefts that hurt and battered Caruso.

Dat Nguyen made his Bare Knuckle debut back in September and won via unanimous decision over Travis Thompson. He looked good in his debut, and his boxing was on full display. He has a professional boxing record of 20-3 and his skills were on display against Thompson. I expected him to get the finish, but he wasn’t able to close the show after suffering a hand injury.

This is another exciting fight and I think most feel Nguyen is the favorite here due to his in-ring experience. He’s fast and has great footwork. To me, however, this is more of a coin-flip and both fighters are talented. I think Valazquez has the power edge, and Nguyen has a speed edge. Flipping a coin and going with Valazquez.

Travis Thompson is 1-3 in BKFC as he lost to Dat Nguyen in his last outing. He looked good for the most part but was beat by a more experienced boxer.  One thing we all learned from watching him fight, is he wants to pressure his opponent and be in their face. He doesn’t back up and is always coming forward and throwing.

Joshua Boudreaux is 0-1 in his Bare Knuckle career after suffering a knee injury in his debut against Adam Pellerano at BKFC 7. Boudreaux took a combo and stumbled awkwardly before falling to the canvas holding his injured knee. He’s back now and healthy heading into this clash with Thompson.

It’ll be interesting to see whether or now Boudreaux will wilt under the constant pressure of Travis Thompson. Thompson never gives you a chance to reset or catch your breath and I see that being a potential problem for Boudreaux. I like Travis to win the fight, likely via stoppage.

Luis enters the next chapter of his combat career with Bare Knuckle FC. He’s dropped his last four fights in MMA but will be a tough out in BKFC. He has good standup and also has quite a chin. He’s involved in the lightweight tournament and will face the winner of Jim Alers and Kaleb Harris if he’s able to get by Britto.

Britto has run into some tough sledding as well, losing his last six MMA fights. He is 1-1 in BKFC having lost his last outing to Jim Alers after scoring a fifth-round knockout victory in his debut against Harris Stephenson. That knockout of Stephenson might be the best highlight knockout in BKFC history. He landed a right hand and Stephenson was out cold before falling like a statue to the canvas. Britto clearly has power in his hands.

I think this is another fight that could be pretty fun. I like both fighters, and they will be desperate for a victory. The end result will be a firefight that will be fun for the fans and result in a knockout. I think Palomino is going to find a way to score the knockout victory in his debut. 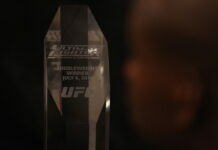