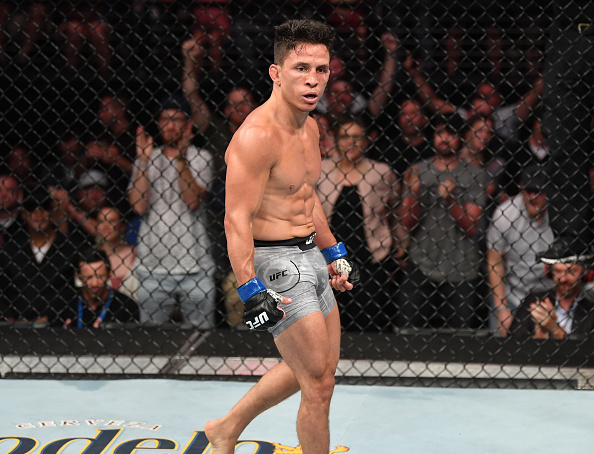 The last time we churned out a Making the Grade piece, it was to preview UFC 247. That event was highlighted by Jon Jones earning a razor-thin decision over Dominick Reyes. This time around we’re going to discuss the main card of UFC on ESPN+ 27 and its main card matchups. In the main event, flyweights Joe Benavidez and Deiveson Figueiredo will meet in a highly anticipated fight. The winner takes home a shiny new belt as the UFC stripped former champion Henry Cejudo.

In the co-feature fight, Felicia Spencer will meet Zarah Fairn in a clash of featherweights. It’s not the most glamourous fight and it seems odd to see it getting the co-main event billing. The simple fact is, the main card for this event is more than a little weak. Let’s get into it.

This is a match between two guys you likely aren’t altogether familiar with. Darrick Minner is making his promotional debut here, after losing in the first round of his fight on the Dana White Contender Series back in 2019. The one thing you need to know about Minner is he’s a submission machine. In his 24 career victories, 21 have come via submission. The guy will absolutely strangle the opponent if given the chance.

Grant Dawson earned his way into the UFC via the Contenders Series when he submitted Adrian Diaz with a rear-naked choke. Since that time, he’s won both of his UFC fights, defeating Julian Erosa and Mike Trizano. He beat Trizano via RNC as wekk. So it’s safe to say both of these guys like to submit their opponents.

This is potentially going to be an entertaining fight between two guys who like to grapple. With it featuring a promotional debut, it might not be suited to open the main card. Darrick Minner could have nerves, which causes him to have lackluster performance. Either way, in terms of rankings, name recognition, and overall big fight appeal, the fight is a struggle. It might wind up being some fun, but it probably won’t peak the interest of fans.

Megan Anderson is a talented fighter and has the potential to be a star in the UFC. Since joining the ranks of the UFC she’s 2-2 having won in her last outing against Zarah Fain. She’s a natural for the featherweight division and one of only a handful of 145’s on the women’s roster. She has the look and personality to become a star but needs to become more consistent inside the Octagon.

Norma Dumont brings her unblemished 4-0 record into this fight. She’s making her UFC debut and won her last fight via majority decision and lightly regarded Mariana Morais who had lost four of five before her clash with Dumont.

Dumont will be giving up five inches in height and quite a bit of reach in her fight with Anderson here. She’s going to struggle to get inside and could have some issues in the early going. Megan Anderson will throw kicks and jabs to keep Dumont at distance and this seems a fight that is designed for Megan Anderson to perform to the height of her abilities. Anderson will probably cruise to victory, but it probably doesn’t matter. This is not a fight that has the MMA world abuzz.

Magomed Ankalaev is a talented fighter who brings an impressive 12-1 record into this fight. He’s won three of four since entering the UFC and has won two of those three via TKO. He likes to strike and has five first-round TKOs on his record. His front-kick knockout of Dalcha Lungiambula in his last outing is one of the top knockouts of 2019.

Ion Cutelaba is a beast. He’s won three of his last four, all by first-round TKO. His lone defeat in that span came against highly regarded Glover Teixeira. In his last bout, he blasted Khalil Rountree from the mount in round 1. It was an impressive victory, to say the least.

This might not be the most compelling fight as it pertains to rankings or fan’s interest. That said, it’s going to be a banger. It’s almost a guarantee that someone is going to get knocked out, and in all likelihood, it’ll happen early. You won’t want to be away from your television when this one starts. It’s guaranteed fireworks.

Felicia Spencer is a tremendously talented fighter. This is her first fight back after being dismantled by Cris Cyborg in July of last year. She was undefeated heading into that fight but was dominated for five rounds. Spencer beat Megan Anderson in her promotional debut and looked sharp in the process. “Feenom” needed less than a round to submit Anderson via RNC.

Zarah Fairn brings her 6-3 record into the fight after losing her UFC debut to Megan Anderson. She’s a known commodity within the UFC fanbase, and this seems like a pretty big stage for her.Based on her previous fights, she’s likely in over her head in this matchup.

Felecia Spencer is just too big and strong for Zarah Fairn here. She’s likely going to control the distance standing and if the fight hits the mat, Felecia is the better grappler. There’s simply not a lot of paths to victory for Fairn in this fight. It’s a bit of a puzzling co-main event, but such is life. Speancer wins this one, but we’re almost done with this card and there’s still not a compelling matchup that makes the event a must-see.

Joe Benavidez is a stud. If there wasn’t a fighter out there named Demetrious Johnson, Benavidez would have been a champion a while ago. He’s won nine of his last ten fights, dropping only a razor-thin split decision to Sergio Pettis. Joe Benavidez has talent in all areas of the sport. He’s a great grappler and has good standup. The longtime team Alpha Male standout is undoubtedly elite. He now has a chance to put the gold around his waist.

If you’re looking to make a list of criminally underrated fighters, Deiveson Figueiredo belongs on the top of it. He’s been overlooked for a long time despite his rarified skillset. Figueiredo is 17-1 and his lone defeat came at the hands of the talented Jussier Formiga. “Deus da Guerra” (God of War) is the third-ranked flyweight in the UFC and has a huge opportunity here to leave Norfolk as the new champion.

This fight is going to be one for the ages. Both guys are super talented and it’s likely going to take all twenty-five minutes to determine a new champion. This is the only fight on the card that has highly ranked fighters going up against each other. This is one of those title fights that legitimately could go either way. This is a must-see fight; t’s going to be good.