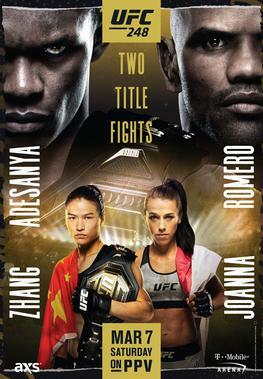 We’re beginning to inch closer to UFC 248, and as always there’s plenty to be excited about on the main card. Weili Zhang will defend her strawweight title against Joanna Jedrzejczyk in a co-main event contest. It’s the final fight of the night, though, that we’re focusing on in this early preview: reigning middleweight champion Israel Adesanya vs. “Soldier of God” Yoel Romero.

Those who have watched these two before know that they represent a legitimate contrast in physical attributes and fighting style, for two fighters who will be competing at the exact same weight. The official matchup stats per the UFC’s own site list Adesanya at 6’4’’ with an 80-inch reach, next to his Cuban counterpart’s 6’0’’ and 73.5-inch reach. Adesanya also has longer leg reach, though the advantage there isn’t as distinct as it is with his arms (44.5-inch to 42-inch).

As for style, we would expect to see a little bit of an offence-versus-defence battle in this fight. Adesanya is a very complete fighter when he’s on his feet. He strikes well, moves quickly, and will look to use his youth and fitness to his advantage in an attempt to wear Romero down and start landing punishing hits. Romero, meanwhile, is not a purely defensive fighter by any means, but may have to pick his punches in this one. He’s a good striker, but again, Adesanya will move well; he’s a superior wrestler, but Adesanya is rarely taken down. It seems likely, therefore, that we’ll see Romero absorb some damage as he waits for a chance at a big hit (something Adesanya has allowed a few opponents in the past, though never en route to a loss).

For people who are hoping to get a more exact read on what to expect from a fight like this, we ought to point out that betting odds out of the U.S. have actually become significantly more visible. Granted, this particular UFC event takes place in Las Vegas, where sports betting has long been part of the atmosphere. But you no longer have to be in Sin City, or familiar with it, to gain a clear perspective on the betting outlook — because other parts of the U.S. now allow betting too, which has led to busier online markets.

New Jersey in particular has led something of an online betting revolution, and has now introduced several sports betting sites to the American public. These sites — bet365, 888sport, and others — may not necessarily be new to UFC fans in Canada or in Europe, but now that they’re operating on U.S. soil they’re more likely to provide accurate, advance odds on major American events such as UFC 248.

Accordingly, we took a look at some of the New Jersey betting platforms and found Adesanya as a clear favourite — and perhaps even more of one than we might have guessed. He’s generally being listed with something like 4/9 or 4/10 odds, with Romero positioned roughly as an 11/5 long shot. This doesn’t make Adesanya an overwhelming favourite, and it’s clear the U.S. oddsmakers are respecting Romero’s knockout potential. But it’s still clear where the smart money is for this title bout.

This will be the first fight between Adesanya and Romero, meaning there’s no recent history to examine between the two of them. However, in looking to the past to assess this fight, we may be able to glean the most from how both competitors have handled Robert Whittaker in recent years.

For his part, Romero has struggled with the tough-as-nails Australian. We detailed the excellent fight between the two that took place at Chicago’s United Center in June of 2018, in which Whittaker narrowly came out on top. Romero had also lost to Whittaker a year prior to that Chicago bout, by unanimous decision in a slightly less memorable title fight. Israel Adesanya, meanwhile, earned his middleweight belt with a second-round knockout of Whittaker just a few months ago, in October of 2019.

That contrast does not, of course, mean that Adesanya will have an easy time with Romero. However, it is yet another point in his corner, and another reason to back him as a favourite here. Ultimately what we seem to have is a very promising fight with a challenger whose ability to win is not in question — but a title holder who might just be too good.