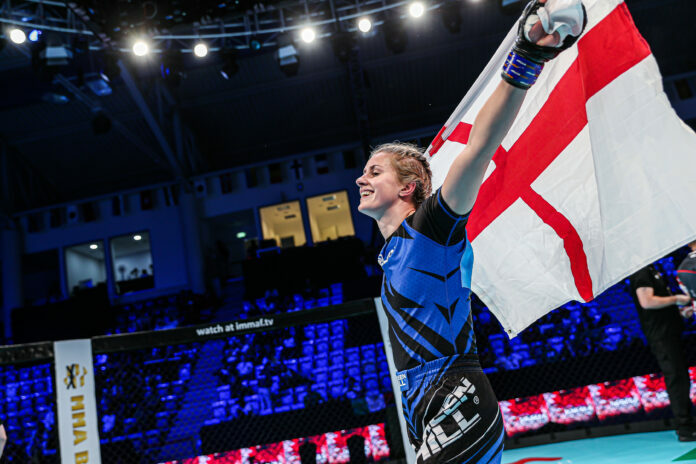 25-year-old Lexi Rook returns to the cage at Probellum 1 in Liverpool on March 7th. With an amateur record of 6-2, Rook is certainly an exciting prospect. MMASucka spoke to Rook, the former Cage Warriors Academy SE flyweight champion ahead of her next fight covering her career, upcoming bout and goals in MMA.

Having only been fighting for 3 years, Rook is clearly a talent. In 2019, she competed internationally at various IMMAF events. At the premier amateur MMA federation, Rook described her experience as ‘incredible’. At just 25, her experience at IMMAFs led to her learning ‘so much about myself as an athlete’. Stating that it ‘stood me in good stead for future fights and opponents’, it proves just how much of an important experience it was for the young Brit.

She will certainly be looking to carry the momentum of her IMMAFs performances last year into her bout with Sophie Luxton at Probellum 1. Having moved to live and train in Liverpool only recently, Rook is now a member of Team Aspire.

Excited to feature on only the second Probellum card, ‘SheRa’ sees this as a great opportunity. Liverpool has produced top talent in the last few years with names such as Darren Till, Molly McCann and Mike Grundy all impressing as of late. Lexi Rook sees her fight in March ‘an opportunity to introduce myself to the northern fight scene and for my team, coaches and myself to see how far I’ve come in the last couple of months’. The clear intention to not only promote herself in the eyes of the northern fight scene but also want to showcase her improvements and progression is certainly exciting for fans of Rook.

Lexi Rook will take on fellow Brit, Sophie Luxton in Liverpool. A 5-4 amateur riding a three-fight winning streak, Luxton will be looking to upset Rook. You can bet that Luxton will also come prepared, training at Team Renegade in Birmingham, England.

Lexi Rook acknowledges that Luxton has been training and fighting for longer than her, but describes her as ‘just another opponent’ and thinks she is ‘the better fighter’. Where does that belief come from? Rook stated she has ‘been tested a lot more than her. I’ve fought tougher, stronger opponents, competed on international platforms, dealt with a lot more pressure and mental challenges’. All of this in just 3 years is certainly impressive, claiming it has been both ‘very busy and productive’.

What is most important is that Lexi Rook isn’t overlooking Sophie Luxton, despite being the hometown fighter. ‘I respect Luxton for her work ethic, I see she trains hard and is focused’. With this acknowledgement, however, comes a caveat. There is a firm belief from Rook that her opponent just ‘hasn’t quite got what I have’ and is simply ‘just another opponent’ to the exciting, talented Brit.

What can we expect from Rook at Probellum one? Simply put, ‘I’ll be going in there to do what I need to do to beat her. Business is business’. Cool, calm and collected, SheRa is certainly focussed for this bout.

What does the future hold for SheRa?

Before we go any further,  where does the nickname ‘SheRa’ originate? Rook explains that it is from an 80s cartoon, ‘SheRa – The Princess of Power’. Riding a unicorn and carrying a sword, SheRa defeats all the villains. The nickname was given to Rook at her old gym after she began to develop muscle. Teammates coined her SheRa, and the name has stuck ever since.

When asked what her fighting dream is, Rook displayed a clear vision, which was impressive after such a short career.

‘It’s not a dream anymore, it’s a goal. I will be a full-time professional fighter and I will fight in the UFC in the next 5 years. I will have a successful run as a professional athlete and then I will look to give back to those who helped me’.

This road to the UFC starts at Probellum 1 in Liverpool on March 7th.

What is so refreshing to see is that although she has a clear goal in mind, Rook also has a plan post-fight career. After fighting she wants to ‘collaborate with drug and alcohol rehabilitation centres and mental health departments. Helping vulnerable adults and help bring MMA and combat sports into the curriculum’.

Why does this matter to her so much to Rook? She simply states that ‘there are not enough constructive activities available currently for these departments. I think it would be amazing to help people see what martial arts truly can do for you’. The passion shown for such a great cause is amazing to see from such a young athlete.

You can catch Rook vs Lexton at Probellum 1, March 7th live from Liverpool. Be sure to tune in and watch Rook in action as she is sure to entertain and put on a show in front of her home crowd. The card is headlined by former UFC star Paul Kelly.