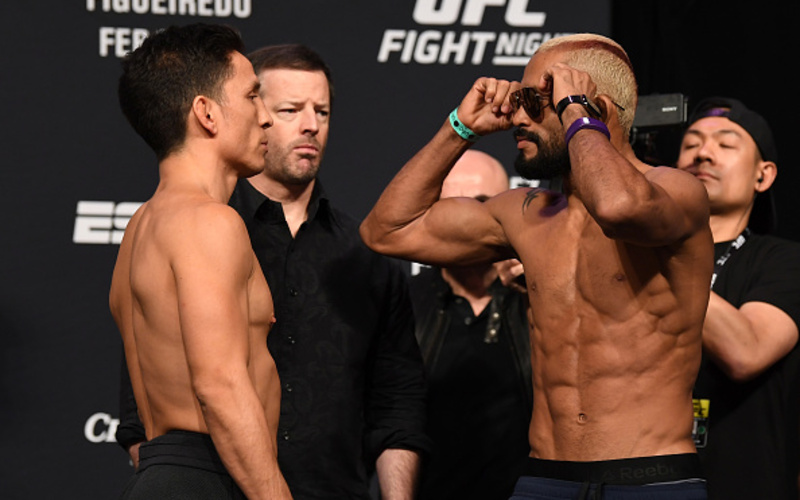 The UFC heads to Norfolk, Virginia for UFC Fight Night 169 as the vacant flyweight belt is on the line in the main event. Fighting for the flyweight title for the third time in his career, Joseph Benavidez looks to finally capture the title against Deiveson Figueiredo. Only Benavidez will be eligible to win the title as Fiegueiredo missed weight by two and a half pounds. Benavidez  failed in his first two opportunities at the title, losing to former champion Demetrious Johnson  twice. Now with the title on the line and no ‘Mighty Mouse’ in the way, Benavidez looks to finally win gold after nearly nine years in the UFC. As for Figueiredo, a win will not win him the title, but will potentially earn him another shot later on. Both men are coming off impressive win streaks with finishes over fighters like Tim Elliot, Alex Perez and Jussier Formiga.

In the co-main event, Felicia Spencer looks to climb towards a women’s featherweight title shot as she takes on Zarah Fairn. After beginning her career 6-0, Spencer entered the UFC and scored a big upset win over Megan Anderson. She would then face off against former UFC women’s featherweight champion, Cris Cyborg. A win would have nearly guaranteed her a title shot, but she would lose by unanimous decision. However, Cyborg would end up moving on to Bellator, leaving the door open for Spencer. But Spencer will have to get by Fairn, who is 3-1 in her last four, most recently losing to Megan Anderson.

Kicking off the main card will be a featherweight fight between Grant Dawson and Darrick Minner. Dawson is coming off a five fight win streak, most recently defeating TUF 27 winner, Mike Trizano. Minner will be making his UFC debut coming off two straight wins, most recently defeating Charlie DuBray. Next up will be a women’s featherweight fight between Megan Anderson and Norma Dumont. Anderson is coming off a recent victory of Zarah Fairn. Her opponent, Dumont, holds a record of 4-0 as she makes her octagon debut. Finally, before the co-main event, light heavyweight collide as Ion Cutelaba takes on Magomed Ankalaev. Cutelaba most recently defeated Khalil Rountree Jr. by TKO. Meanwhile, Ankalaev holds a three fight win streak with a recent win over Dalcha Lungiambula.

Follow along with MMASucka as we provide you with the results throughout UFC Fight Night 169.

*Figueiredo missed weight by 2.5 pounds and will give up 30 percent of his purse; he is also ineligible to win the title