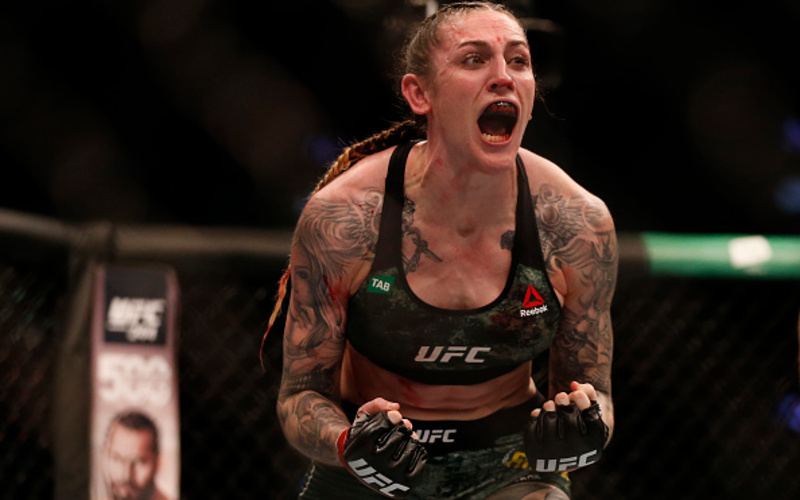 Norfolk, Virginia played host to a UFC main card that gave fans more questions than answers. Two divisions seem to now be in disarray while an extremely controversial stoppage left fans frustrated. UFC Fight Night 169 Post-Fight Matchmaker will parse through those situations and more to make sense of what should be next for each main card winner.

After Grant Dawson was able to defend a couple of Darrick Minner‘s submission attempts, it was smooth sailing for him. Dawson has now been impressive in each of his first four UFC outings. As a result, he will now be looking to quickly climb the featherweight division’s ladder. A fighter in a similar point of their career is “Mean” Hakeem Dawodu. After losing his UFC debut, Dawodu has won four straight. This pairing would be a fun fight that would move the winner closer to the division’s rankings.

Megan Anderson picked up an impressive KO win, flattening Norma Dumont in the first round. With the entire women’s featherweight division fighting tonight, save the champion Amanda Nunes, it stood to reason that one of the night’s two winners from the division would get a title shot. While Anderson looked impressive, the title shot will likely be given to Felicia Spencer, who looked equally as impressive and beat Anderson less than a year ago. Assuming the division continues to exist, Anderson likely faces a new UFC signing while continually building her title shot case.

Normally, a TKO win within a minute of the first round would not lead to an immediate rematch. However, most people who watched this fight can agree that referee Kevin MacDonald‘s stoppage was definitely premature. Ion Cutelaba did not seem to be perilously troubled by Magomed Ankalaev‘s attacks. It makes sense for these two to run it back quickly, assuming everyone is medically fit to compete again. The winner of the rematch, as mentioned last week, should face Jimmy Crute to determine who makes a run into the division’s list of contenders sooner rather than later.

As previously mentioned, Felicia Spencer utilized a heavy ground-and-pound attack to bludgeon Zarah Fairn in an impressive fashion. That performance plus a win over the only other true contender in Anderson grants her a shot at the title in a dreadfully shallow division. In her prior fight, Spencer held her own against former UFC and current Bellator champion Cris Cyborg. Her performance showed that she can hang with the best of the best, so the potential matchup with Amanda Nunes does carry some intrigue.

If not for his weight mishap, Deiveson Figueiredo would be the new UFC flyweight champion. In the night’s main event, he took out Joseph Benavidez in the second round with a straight right hand that sent the longtime flyweight contender crashing to the canvas. Assuming the UFC allows him to continue fighting as a flyweight, he should face the winner of the upcoming match between Jussier Formiga and Brandon Moreno. Formiga has a win over Figueiredo and has always been on the cusp of title contention, but has never realized his shot. Meanwhile, Moreno’s second stint in the UFC has proven that he can compete with anyone on any night. Either match has its intrigue, but the real question would be whether or not the UFC would risk having the flyweight title held up even longer with the risk of another weight miss.