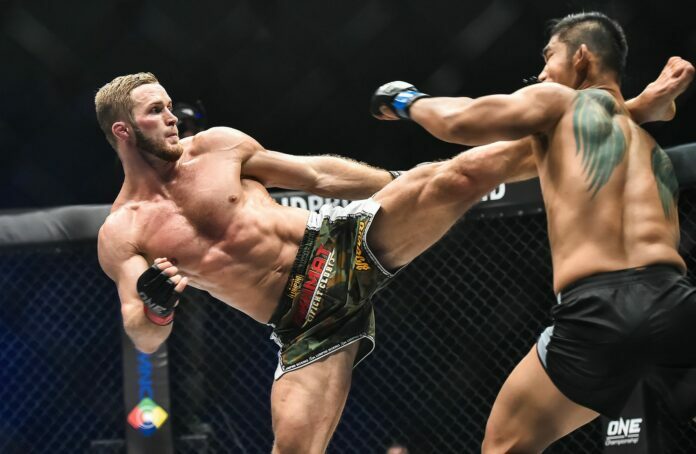 Vitaly Bigdash was once the ONE Middleweight World Champion. He will always be remembered for that accomplishment, but his road through mixed martial arts began before that note of history and continued after he dropped the gold to a rival.

What led him down that path? Follow along from his childhood in Russia to his start as a mixed martial artist. Learn about the Russian’s road through the Russian regional scene that led him to a world title in Asia.

Ahead of his trilogy contest against Aung La N Sang at ONE Infinity 1, here is a quick look at the No. 1-contender for the ONE Middleweight World Championship.

While growing up in a military family, Bigdash developed a love of martial arts through the boom of films of the genre in the 1980s. In an interview with ONE Championship, Bigdash recalled wanting to be like Chuck Norris and Jean-Claude Van Damme.

The Russian’s beginning in martial arts was in training Kyokushinkai. When the rise of mixed martial arts came with the UFC and Royce Gracie, a new world opened for Bigdash.

As he began to mature, Bigdash trained for mixed martial arts. He became well versed on the ground and continued to develop his striking by utilizing boxing and Muay Thai. He would join Akhmat Fight Team to refine his skills as he turned into a professional athlete, embarking on a journey to reach the height of the sport.

Path to the Championship for Vitaly Bigdash

Competing mainly in Russia, Bigdash began his career with seven consecutive victories. Each of those seven victories ended before the judges were called upon to render a decision.

The performances and perfect finishing rate caught the attention of ONE Championship.  The talented Russian would join the organization and be immediately thrust into a ONE Middleweight World Championship bout against reigning champion Igor Svirid.

The title tilt was not without adversity. Svirid knocked Bigdash down in the opening round on two different occasions. The Akhmat Fight Team representative used his ground game to survive and nearly submitted the champion at the end of the round. Having been saved by the bell, Svirid escaped and made it to the second round.

Bigdash sensed the end was near and attacked early with a left knee that was followed by a right hand that put Svirid on the canvas. After some follow-up hammerfists, Bigdash capped off his ONE Championship debut with a middleweight title-winning performance.

The bout would go the distance with Aung La N Sang performing admirably; however, Bigdash would retain his gold via a unanimous decision.

But it was Aung La N Sang’s performance that earned him an immediate rematch allowing him a full training camp. In another hard-fought contest, the two warriors went to a decision. After 50 total minutes of action between the two, Aung La N Sang leveled the series and became ONE Middleweight World Champion.

After dropping a bout to Leandro Ataides, Bigdash was looking to get back in the win column. And he would do just that at ONE: Destiny of Champions in December of 2018 against Yuki Niimura.

In just under a round, the Russian locked in a reverse triangle armbar for the victory. The win put him right back in the hunt for a championship rematch. After not competing in 2019, Bigdash finally got the call he was looking for and will have an opportunity to complete the trilogy with Aung La N Sang.

At ONE Infinity 1, the two will run it back one more time.

The two martial artists have shared blood, sweat, and tears through their first two meetings. Now, they have an opportunity to determine who the better man is by settling their score in a deciding contest.

From watching martial arts films to training Kyokushinkai to transitioning to mixed martial arts, Vitaly Bigdash has dedicated his life to the pursuit of greatness as a martial artist. A lifelong quest did not end with his ONE Middleweight World Championship victory but persists as he hopes to reclaim the gold against his biggest rival.