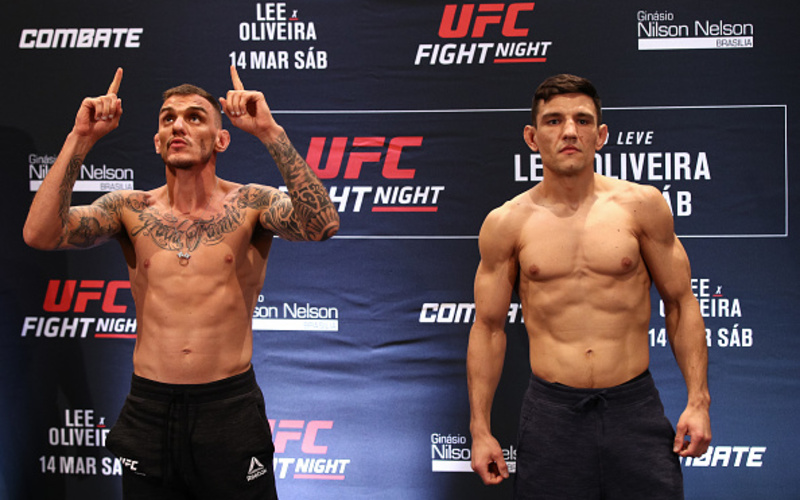 MMASucka staff picks are locked in for this evening’s UFC Fight Night 170. Fight action will take place from the Nilson Nelson Gymnasium in Brasília, Brazil, only the promotion’s second trip to the country’s capital. The main card will begin at 6:00pm ET (3:00pm PT) live on ESPN+.

Bellator 241 staff picks were intended for this weekend until it was announced Friday afternoon the event would be postponed as a result of the recent Coronavirus (COVID-19) pandemic.

A thrilling main event will be in store as former lightweight interim title challenger Kevin Lee takes on bonus-racking veteran Charles Oliveira. The bout will be met at a catchweight of 158.5 pounds after Lee came in two and-a-half pounds over the allotted limit.

Lee comes in fresh off the biggest victory of his career, stopping the undefeated run of Gregor Gillespie with one of the greatest head-kick knockouts in UFC history. The win came in his return to the lightweight division, having moved up in weight for one fight previously suffering a loss to Rafael dos Anjos. The former title challenger looks to make a statement in his seventeenth UFC outing. His opponent, Oliveira, is set to better that with his 26th promotional fight. The Brazilian Jiu-Jitsu black belt has seen both highs and lows throughout his time but currently rides a dominant six-fight win streak; all of those by finish (two KO’s, four SUB’s). Oliveira will look to back up his strong run in 2019 including knockouts over Nik Lentz and Jared Gordon.

In the co-main event, BJJ wizards Demian Maia and Gilbert Burns will scrap in the welterweight division. Both fan-favorites will look to back up 3-0 runs in 2019 as they make their rise in the 170-pound division.

Also on the main card includes Brazil’s Renato Moicano, the always-entertaining Johnny Walker, and the well-rounded Francisco Trinaldo. See all the UFC Fight Night 170 fights counted for our MMASucka staff picks further below.

Check out our staff picks for UFC 248 below.