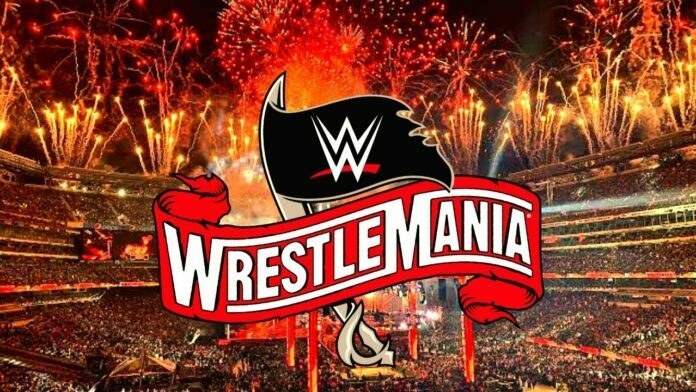 Today is the first day of what is considered the Superbowl of pro wrestling. Wrestlemania 36 will be taking place in front of an empty arena (due to the coronavirus pandemic) at WWE’s Performance Center in Florida. The show was also taped in advance with multiple finishes filmed so the outcomes are entirely unknown. This will no doubt go down as the most unique Wrestlemania in history and if the matches don’t intrigue you, seeing how WWE adapts to an empty arena Mania has to. For better or for worse, no one knows which matches go on today or tomorrow. As of now, there are a total of 18 matches. Wrestlemania’s tend to be a chore to get through, but hopefully, the splitting of shows will change the pacing positively. Keep up with all the Wrestlemania 36 results below.

Here are some of the matches to look forward to:

Brock Lesnar (c) vs. Drew McIntyre for the WWE Championship

Drew McIntyre made a name for himself winning this year’s Royal Rumble. He was a guy who was always pegged to be a main eventer but did was never truly ready for that spot. Since returning to WWE, slowly worked himself up the card and has proven to be a person that the fans can get behind. Facing Brock Lesnar and coming out a winner though is easier said than done. Lesnar has held the belt for over 760 days and usually dominates every match he is in.

Shayna Baszler is the standout women’s wrestler on the roster. Her unique presence and look sets her apart from the rest. She has that badass quality that few WWE wrestlers have. She is a former NXT Women’s Champion and has the longest reign of any champion. Fan favorite Becky Lynch has faced many challengers in her 360 plus reign but perhaps no one as tough as Baszler. Lynch has managed to beat the odds many times but in this match, she will have the cards stacked against here.

Daniel Bryan vs. Sami Zayn (c) for the Intercontinental Championship

Out of all the matches advertised this is the match that should be the best in terms of a wrestling match. At one point the intercontinental belt was on par with the WWE championship but in recent years has become incredibly devalued. Daniel Bryan is a pure wrestler’s wrestler and him winning could potentially raise the status of the belt. This is Sami Zayn‘s first championship win on the main roster and he will no doubt do anything to hold on his belt. Look for his buddies Shinsuke Nakamura and Cesaro to try to sneakily help Zayn so that he can possibly retain.

If you want some in-depth previews of the individual matches from each brand courtesy of sister site Last Word on Pro Wrestling, you can go to the Smackdown preview here and the RAW preview here.

You can watch Wrestlemania 36 live on the WWE Network, FITE TV, and the Fox Sports app starting at 7 p.m. EST. And we will have Wrestlemania 36 results all weekend long.

Cesaro def. Drew Gulak by pinfall after an airplane spin at 4:25: A simple good match. Gulak took control working over Cesaro’s right arm to negate Cesaro using the neutralizer finisher. Cesaro pushed Gulak into the referee and used that momentary distraction to uppercut Gulak and put him into the airplane spin and defeated him by pinfall.

Alexa Bliss and Nikki Cross def. Kabuki Warriors by pinfall after a Twisted Bliss at 15:05 to become the Women’s Tag Team Champions: For most of the match, the Kabuki Warriors took turns putting delivering to Alexa Bliss. During the match, both Kairi and Asuka were trash-talking Bliss in Japanese which was funny. Then Nikki Cross did a rally the crowd clap spot…. to an empty arena…. Bliss tagged in Cross who screamed maniacally. The match devolved into all four coming into the ring and brawling. Kabuki Warriors did a cool top turnbuckle jumping forearm into a powerbomb double team move. Bliss tagged in again and got a twisted bliss on Sane and won by pinfall, becoming the new champions. A good tag match. Nothing more nothing less.

Elias def. King Corbin by pinfall after a roll-up at 9:00: In a match no one on earth (or the WWE Universe) asked for. Before the match started Corbin came out and showed footage of him causing Elias to fall 20 feet onto concrete. Corbin said Elias cannot compete so he must be declared the winner. Elias music plays. The crowd goes mild. Elias hits Corbin with his guitar and the match starts. Elias has sports tape on his shoulder despite falling 20 feet on his back….. I don’t understand either. Corbin is working on that “injured” shoulder and yelling at the commentators for some reason. Elias comes back with a turnbuckle mule kick. He ripped off his, gave some awful forearms to Corbin’s back. Corbin came back and tried to use the ropes for leverage for a pinfall but the ref saw. Corbi argued with the ref and Elias got a roll up on Corbin and HELD HIS TIGHTS for the pinfall. Terrible match. Terrible finish.

Becky Lynch def. Shayna Baszler to retain the RAW Women’s Champion by pinfall in 8:32: Bell rang and they immediately ran to each other and got into a slap battle. Baszler took over kicking and punching Lynch. Lynch did a rock bottom to Baszler on the apron and it sounded nasty. Lynch rolled Baszler and got a two count pin and the two stopped to work out the next spots of the match! Baszler came back and tried submitting Lynch with various armbar submissions but Lynch powered out of the attempts. Baszler went for the Kirifuda Clutch submission and Lynch reversed it to a pin for the win. Good match with a terrible anti-climatic finish.

Sami Zayn def. Daniel Bryan to retain the Intercontinental Championship by pinfall after a yakuza kick at 9:13: Daniel Bryan came out with Drew Gulak and Zayn came out with Cesaro and Shinsuke Nakamura. Zayn stalled by exiting the ring and running away. Cesaro and Nakamura got in the way of Bryan when he tried to go after Zayn. Gulak attacked Nakamura and Cesaro and sent them packing. When the two started wrestling Zayn begged Bryan to stop. Bryan worked submissions and ground and pound on Zayn. Zayn even started crying which was funny. Zayn tried to come back but none of his offense worked on Bryan. Nakamura and Cesaro ran out and attacked Gulak and Bryan took them out with a dive. Bryan went up to do top rope spot and Zayn caught him with a yakuza kick as he jumped and pinned Bryan to retain. Best match of the night so far.

John Morrison def. Jimmy Uso and Kofi Kingston in a ladder match to retain the Smackdown Tag Team Championship in 18:39: So this is apparently a tag team championship match with only member of each tag team in the match….? I don’t know. This company doesn’t make sense sometimes. A bunch of moves happened. They used the ladder. This match is a blur. Then in a finish that recalls some of the worst of TNA back in the Russo era, all three grab a hold of the rack holding the belts. They kick f Morrison who falls on a ladder. The belts fall down and Morrison crawls to the belts and grabs them. Dumb finish.

Kevin Steen def. Seth Rollins by pinfall after a Stone Cold Stunner in 15:22: Seth Rollins has been the most boring main eventer in many years. Moves happened during this match. None of it mattered. Rollins DQ’ed himself intentionally using the ring bell on Steen. Steen then challenged Rollins to a NO DQ match. Steen pinned Rollins after a Stone Cold Stunner. Missable and forgettable. Here is a better match between the two 10 years ago in Ring of Honor.

Braun Strowman def. Goldberg by pinfall to become the new WWE Universal Champion after a powerslam in 2:10: Goldberg did a bunch of spears to Strowman and he kicked out of a pin. Goldberg tried for the Jackhammer but Strowman reversed into a powerslam. Did three more powerslams for the pinfall win. Short and sweet.

Undertaker presumably killed AJ Styles after a THIS IS SPARTA Kick to him into an empty grave then burying him alive at 18″17: How to describe this… First off this wasn’t in a boneyard but in a graveyard. I call false advertising. Then this was filmed cinematically. With a soundtrack and sound effects and everything. This is something Vince McMahon has been OBSESSED with forever. He has always said “We make movies,” they are not a wrestling promotion. A prop shovel and prop statue were used as weapons. You ever see those dumb straight to Syfy movies where the choreography and everything is so low rent. This is that. But in fairness, there is an enjoyment you can get out of that. The corny factor for this match was at an 11. This match even managed to put in an “Undertaker coming back from the dead spot” that he always used to do in the 90s. He used his Undertaker power to conjure fire also. Is this a good match? I don’t know. Is it a bad match? I don’t know. There will be dumb WWE fans who love this because they don’t know any better but what I can say is I couldn’t take my eyes off the screen. This is the type of wrestling match that gets people talking for better or for worse and in this day and age, this might be the best thing to say. It’s a match that needs to be seen to be believed.