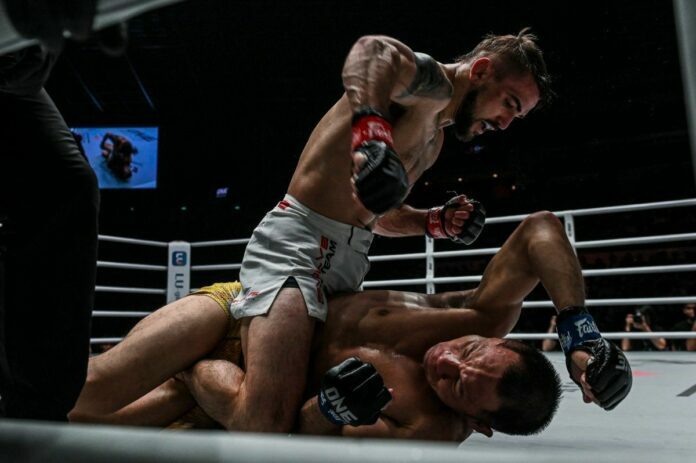 If you are on the lookout for a rising star, you may want to add “Pretty Boy” Troy Worthen to your shortlist.

The ONE Championship bantamweight sits with an unblemished 7-0 professional record and could be eyeing a title shot when action gets underway again in 2020. He possesses credible wrestling, jiu-jitsu, and carries knockout power in all of his limbs.

Where did he come from, and how did he ascend the ranks in ONE? That’s what we’re here to discuss. Let’s take a closer look at the rise of “Pretty Boy” as one of the top bantamweights on the global scene.

The Early Career of Troy Worthen

Worthen turned pro in November of 2015 at Real Fighting Championships 35: Showdown in Tampa, Florida. On the regional show, the Floridian defeated Patrick Corrigan by unanimous decision.

From January 2017 to July 2018, Worthen would compete in a trio of bouts for Combat Night in Florida.

First was a meeting against Ralph Valdez that ended via second-round submission. He followed that performance up with his first knockout victory over Jason Valle. In his final regional matchup, Worthen picked up a decision victory over Jeremias Fernandez.

The University of Central Florida collegiate wrestler showed that he had evolved his skills with his 4-0 run. With his undefeated record attached, Worthen tried out for the Evolve MMA fight team in Singapore and moved there full-time to dedicate himself to his craft.

As a member of Evolve MMA, Worthen debuted in ONE Championship at ONE: Masters of Destiny against Rui Chen. The Chinese athlete sported an undefeated record himself, but Worthen was able to make a statement with a second-round TKO to announce himself to the promotion.

Four months later, the American met the hard-hitting Chen Lei at ONE: Edge of Greatness. Once again, Worthen showcased his ever-evolving skills with a second-round TKO. The victory put him in the thick of the title hunt in ONE’s bantamweight division.

In 2020, “Pretty Boy” matched up against Mark Abelardo Fairtex. Over the course of 15 minutes, Worthen gave the Kiwi everything in his arsenal, but he was unable to put him away. It was a clear-cut decision for Worthen, but Fairtex’s incredible chin pushed Worthen to the limits.

Worthen is a talented wrestler with a credible ground game and knockout power. And the scary part is that he is only getting better at just 27 years of age.

Seven professional bouts. Seven victories. More impressively, Worthen has rarely looked to be in trouble. He has utilized his full skillset to take control of the contests and emerge victoriously. It is almost time to take a step up to the upper echelon of the division and take a shot at the king.

And that king is longtime World Champion Bibiano Fernandes. While Worthen is content on taking his time moving up the bantamweight ladder, the Floridian now sits on the precipice of a title shot and ushering in the era of “Pretty Boy”.

Keep an eye on that potential bout as Worthen may be one of the most unsung young warriors on the global scene today.