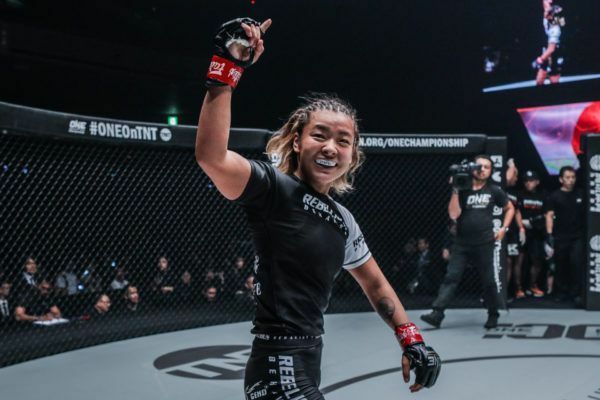 While the global pandemic has curtailed professional sports in 2020 for the time being, ONE Championship was able to complete four top tier events through the first quarter of this historic year.

A lot was learned in those three months. New champions were crowned, challengers revealed themselves, and prospects stood out.

Let’s take a step back to review everything that transpired and see what we learned. Here are the three biggest takeaways from the first quarter of ONE Championship’s 2020 schedule

An early bright spot for ONE Championship has been the rise of talented new stars on the outset of 2020.

Two of the rising stars are in the promotion’s atomweight division: Itsuki Hirata and Rita Phogat. The Japanese standout trains with K-Clann and has used her background in judo to secure five submission finishes since 2018. Phogat recently made her professional debut and has used her strong wrestling base to control her opposition.

American Troy Worthen also kept his professional record clean with a decision nod over Mark Fairtex Abelardo in 2020. Worthen’s wrestling and power strikes have made him a talent worth watching as he inches closer towards a title tilt against ONE Bantamweight World Champion Bibiano Fernandes.

It is easy to focus on veterans and known commodities, but these three warriors show the continual growth and development of young talent who are making their way up the ranks. When the 2020 slate resumes, these athletes should be put on your shortlist.

Although Stamp Fairtex lost her ONE Atomweight Kickboxing World Championship to Janet Todd, she also managed to keep her mixed martial arts dreams alive with a dominant TKO against Puja Tomar.

Her bid to become a three-sport World Champion hit a roadblock in the narrow decision loss, but a trilogy bout with Todd will no doubt be in the cards for Stamp. The dream is still very much alive.

In mixed martial arts, Stamp has shown continual growth of her ground game. As she continues to develop, in combination with her sensational striking, she will be a tough out for anyone in the division. And that includes reigning ONE Atomweight World Champion Angela Lee.

Stamp remains one of the most charismatic stars on the ONE roster. She captivates crowds in and out of the ring. Nobody should sleep on her chances to make a run at gold in mixed martial arts as she becomes even more well-rounded.

New Contenders in ONE Championship

Perhaps the most significant takeaway from the first quarter of 2020 has been the rise of fresh faces into title contention. Four names came to the forefront in the company’s few shows at the start of the year: Pieter Buist, Reiner De Ridder, Iuri Lapicus, and Thanh Le.

Thanh Le got the action started on January 10th at ONE: A New Tomorrow with another first-round knockout against Ryogo Takahashi. His clean record within ONE and knockout streak vaulted him toward the top of the featherweight division.

Twenty-one days later, on short notice at ONE: Fire & Fury, Pieter Buist upended former ONE Lightweight World Champion Eduard Folayang. The performance put the Dutchman into the thick of the title hunt.

At ONE: Warrior’s Code on February 7th, two more athletes moved themselves into the title pictures of their respective divisions. Iuri Lapicus met Marat Gafurov in what was thought of as a tightly-contested battle of grapplers. Lapicus stunned the world with a 67-second rear-naked choke victory and made himself the top lightweight contender for Christian Lee.

In the co-main event, Reinier De Ridder defeated Leandro Ataides by unanimous decision in what was billed as a title eliminator for Aung La N Sang’s middleweight title.

These four athletes made noise at the start of 2020 and will have to be mentioned as the top athletes to watch when the action resumes. Fresh faces make the sport exciting, and these competitors are looking to jumpstart a new era.