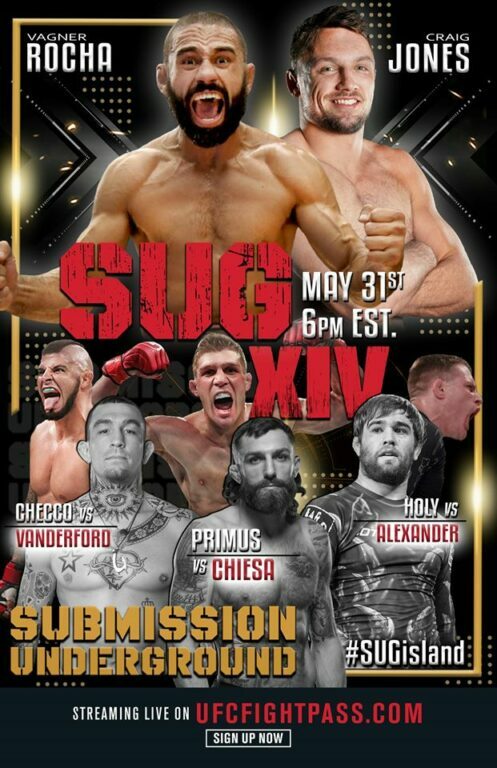 It sounded as if we were going to see Rafael Lovato Jr. square off against Craig Jones in the Submission Underground 14 main event. Well, that is not the case. The SUG 14 main card is set and Jones will face grappling veteran Vagner Rocha.

Jones is undefeated under the Submission Underground banner at 8-0. He has defeated a slew of impressive opponents. Most recently, forced Vinny Magalhaes to stop mid-action at SUG 13 due to a couple of nasty heel hooks.

Rocha has faced Jones before and defeated him. At EBI 11 in 2017, the Brazilian earned the victory via fastest escape time in overtime. The former UFC lightweight had an impressive run at 2019 ADCC until he ran into the 77kg division champion JT Torres.

The main card also features the return of two winners from SUG 13, as Gabriel Checco goes toe to toe with Austin Vanderford.

Checco will return to the SUG cage after earning a decisive reverse triangle choke victory over UFC veteran Jake Ellenberger. And the man with the biggest upset of the night at SUG 13, Vanderford tapped out Richie Martinez with a tight arm-triangle choke.

The main card will be rounded out by Bellator’s Brent Primus taking on UFC’s Michael Chiesa. Primus is a black belt in jiu-jitsu and has finished his last two opponents via submission. Chiesa is a Sik Jitsu Fight Systems purple belt and has a notable submission game. Finally, 10th Planet Grants Pass head coach Andrew Alexander will face black belt Jordan Holy out of Texas.

Submission Underground 14 goes down May 31 from Portland, Oregon.