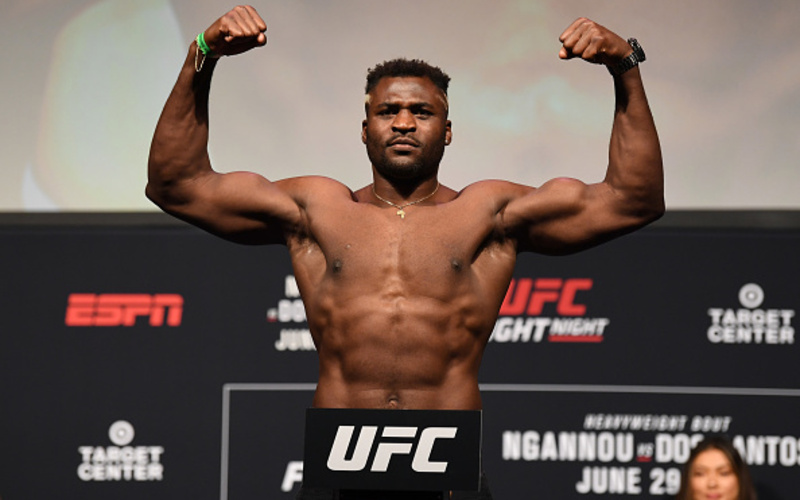 Francis Ngannou (14-3) and Jairzinho Rozenstruik (10-0) will be fighting on May 9th at UFC 249. Originally both men were slated to fight as the main event for UFC on ESPN 8 Ngannou vs. Rozenstruik. Thankfully it’s not five rounds anymore because if everyone gets what they want, five rounds aren’t needed. If we don’t get what we want, then we will be glad for the mercy of two fewer rounds. Both men are known for their power and speed within the division.

Being known for power in the heavyweight division is something worth saying. However, Rozenstruik may not possess the same level of power as Ngannou. In my last piece on this fight, I mentioned that Rozenstruik’s knockouts tend to come when the opponent rushes forward. The apparent exception to this being his latest bout with Alistair Overeem (45-18), where he caught him along the fence. But this does not displace the argument that Rozenstruik’s success comes more from accuracy and timing than it does from raw power.

The main difference when looking at how this fight goes sees that Rozenstruik may have a technical advantage over Ngannou. However, Ngannou is undoubtedly the more terrifying puncher and probably the faster man in the first round. Rozenstruik is a more complete kickboxer, with the ability to lead with his full arsenal. Ngannou is limited to counter punching and leg kicks on the front foot. I believe Rozenstruik’s approach to this fight will largely determine the outcome, and the model to win is not pretty.

Ngannou tends to wait for opponents to commit to strikes, bouncing back and then forward to punish them. This, coupled with his power, means that entering in on him is very dangerous. In fact, the only person to do this successfully was Stipe Miocic (19-3). Stipe used his jab to confuse Ngannou’s counters and utilized head movement to avoid the worst of the blows. Stipe would also use his wrestling when Ngannou committed to wear his man out. Rozenstruik has not shown a committed jabbing game and does not have the wrestling background to get takedowns off the larger man.

A repeat of Ngannou vs. Lewis

Another way Ngannou vs. Rozenstruik could look is to compare it with Ngannou’s fight with Derrick Lewis (23-7). While Lewis vs. Ngannou may have been a terrifyingly boring fight, it did show us that Ngannou will happily let you win by kicking his legs. The biggest obstacle facing Rozenstruik is that he is not six foot four, and he will have to step into Ngannou’s range to land kicks. Ngannou uses the outside leg kick as his main front foot weapon. Rozenstruik should be able to avoid most of the danger if he keeps to an outside kickboxing game where he does not commit to anything.

Fans may be disappointed since both men are known for their extreme violence. To be honest, it would be. But do not despair, for Rozenstruik likes to hit back when he gets hit. His tendencies can be seen in the Overeem fight. When Overeem would land shots on the outside, Rozenstruik would rush forward to give one back. Ngannou can land leg kicks on Rozenstruik and force trades to happen. If a firefight ensues, I feel more confident in Ngannou winning those trades than Rozenstruik.

If Ngannou uses any and all grappling in this fight it may be interesting. While neither man is division one caliber, Ngannou is so much larger, and Rozenstruik’s grappling defense is so abysmal, that I can imagine Ngannou having some success while one top. That being said, it is likely that Ngannou just does as he always does.

Rozenstruik will choose how this fight goes

Rozenstruik will decide how this fight goes. If he plays it safe and sticks to the outside, then he will likely win a prolonged and tedious three-round decision. If Rozenstruik stays in the pocket he will get knocked out. Ngannou vs. Rozenstruik will be determined by Rozenstruik’s composure. All I am saying is thank goodness this fight is only three rounds.