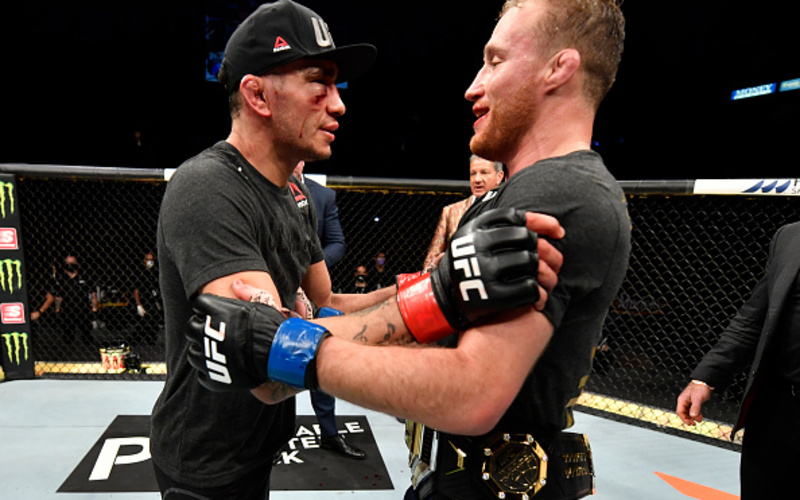 At UFC 249 Justin Gaethje (22-2) beat the former interim lightweight champion, Tony Ferguson (26-4), snapping a 12 fight win streak that lasted over seven years. It is rare for someone to build up a record like this in the lightweight division, and Ferguson proved in his latest match that ending this streak would be difficult. Gaethje managed to bait Ferguson to rush in with leg kicks. Ferguson would take the bait and rush in with an up-jab, and Gaethje would time Ferguson in the pocket, punishing him by moving his head around the jab and coming back with a left hook whenever Ferguson came forward. The damage Ferguson took from this set made Ferguson hesitant to push the pace throughout their fight. Let’s look round by round to see how Justin Gaethje beat Tony Ferguson.

In the first round, Ferguson had some success with the front snap kick. Gaethje was unable to defend the kick to the body with his high guard. Over time Gaethje got the timing of the kick and began to catch it, pulling it across his body and mitigating the damage. He also starts to land outside leg kicks from both back and front legs. Gaethje opens up combinations with the lead leg kick.

Ferguson attempts to punish the kick with a lead left hand. Gaethje is able to move his head on the outside and come back with a left hook. The left hook would land to the side of Ferguson’s face or body. Ferguson would be stunted and would be forced to retreat. Several exchanges in the first round were dictated by this rhythm. Gaethje also does excellent work kicking the calf of Ferguson, not allowing him to be able to step hard on the jab. Ferguson did an excellent job of mixing up the targets on his kicks, keeping Gaethje guessing, and making them difficult to defend against.

The second round continued where the first left off. Gaethje has Ferguson’s timing and is landing counters in the pocket whenever Ferguson attempts to start exchanges. The leg kicks begin to take their toll, and by the end of the round, Ferguson’s movement is beginning to look compromised. Ferguson does not make it easy for Gaethje. He is continually trying to throw leg kicks or jabs, but Gaethje starts to disincentivize Ferguson through counters. Gaethje manages his distance well. He makes great effort to not be pushed onto the fence but rather engage in a kickboxing match at the center of the cage.

Towards the end of the round, Ferguson starts engaging more with Gaethje, still attacking his legs. Ferguson begins pouring it on when both men throw uppercuts simultaneously. Ferguson lands hard. Gaethje is left reeling. Ferguson moves forward to try and finish the fight, but Gaethje gets back to his feet, and the round ends.

Despite rocking Gaethje at the end of the second, the third round is much the same. Gaethje is able to duck under shots and land counters on Ferguson. The damage is starting to accumulate, and Ferguson is wearing massive swelling and cuts on his face. His movement is getting worse, and the leg kicks continue to chip away. However, he is having some success with the jab.

Gaethje is just landing more and more effective counters. Ferguson shows insane durability to keep taking punches that move his entire body backward. Towards the end of the round, Gaethje eases off the pressure, and Ferguson is able to pepper him with shots. Gaethje is largely unphased, but with a minute left, Ferguson goes for a leg sweep and nearly trips Gaethje up completely. Ferguson then gets hit with a head kick, and Gaethje lands another counter right hand as Ferguson tries to move in. The round ends with the momentum clearly in favor of Gaethje.

Round four has Ferguson limp forward at Gaethje. His movement very much compromised at this stage. Ferguson still rushes in with front kicks and fake takedown attempts. Gaethje maintains distance and composure. Ferguson attempts to build a rhythm, trying to throw spinning head kicks and elbows to throw off Gaethje. Gaethje continues to cut away with heavy leg kicks, landing counter combinations whenever Ferguson makes himself vulnerable. The two trade and Gaethje lands a heavy right hook on Ferguson. Ferguson is clearly hurt and backs away, turning his back and nearly running as Gaethje stalks forward.

Gaethje lands more shots before Ferguson can regain his composure. He starts chopping at Gaethje’s leg and throwing jabs. Gaethje stands at the end of Ferguson’s punches, moving fractions of inches to avoid them. The round comes to a close with Gaethje throwing a few more leg kicks that nearly take Ferguson’s feet out from underneath him. In response, Ferguson throws a head kick that doesn’t really connect.

At this point, Ferguson has managed to survive brutal punishment through determination and toughness. The fifth round against Gaethje puts Ferguson through more than anyone could possibly handle. Ferguson starts the round with an ankle pick attempt. Gaethje is able to get free before a takedown is really threatened. Ferguson again tries to initiate engagements, Gaethje ducks and moves his head and connects with a counter. Each counter has a more tremendous toll on Ferguson.

The leg kicks are causing more visceral reactions. Ferguson is committed to fighting and continues to throw punches and kicks of his own. Gaethje starts snapping his head back with jabs. Ferguson looks more hurt with each punch as Gaethje pushes the offensive. Ferguson tries to dive for a leg, but Gaethje avoids the tie-up attempt. Gaethje continues to land on Ferguson. The strikes take a greater toll each time. Ferguson’s body looks broken as the fight pushes deeper into the final round. Gaethje drops Ferguson with a jab as he comes in with punches. The two keep trading until Gaethje lands a left hook that finally breaks Ferguson and forces Herb Dean to stop the fight, Justin Gaethje becomes the interim lightweight champion.

Tony Ferguson’s 12 fight streak in the UFC lightweight division is an extraordinary accomplishment that shows him to be one of the greatest lightweights of all time. Tony Ferguson may be reaching the sunset of his career, but the performance required to snap that win streak required nothing less than exceptional discipline and strong fight intelligence. Justin Gaethje was able to have an outside kickboxing match and use the same combinations to punish Tony Ferguson when he came in. Justin Gaethje beat Tony Ferguson with discipline, power, a good gameplan, and sound fundamentals.