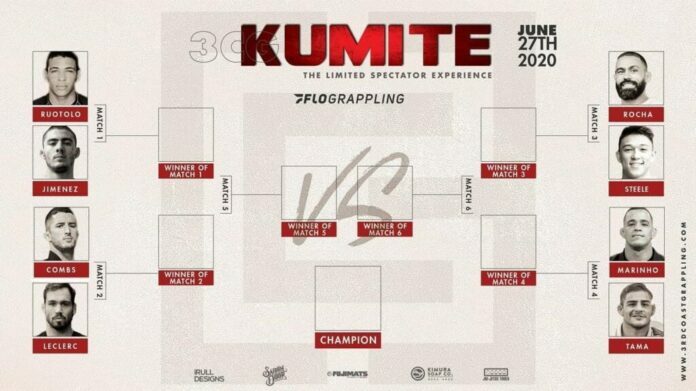 It’s No-Gi season and Third Coast Grappling Kumite III appears to be the hottest card of the summer. Even if you aren’t a no-gi fan, this card will for sure pique your interest and may even convert you into a fanatic. This card is stacked with 180-pound beasts.

Over the month, we’ve seen many familiar faces compete week after week, whether it be at Who’s Number One (WNO), Fight 2 Win, Jitz King, Third Coast Grappling (3CG) or Submission Underground (SUG). Favorites fell short and underdogs became victorious. Perhaps this is what is so intriguing about Kumite III. We have seen all but one competitor fight in the last few weeks in one or all of those shows.

Sunday’s SUG 15 card gave us a small preview of what’s to come at Kumite III. On one side of the bracket there was Kody Steele, coming straight out of quarantine with big wins against ADCC veteran Alec Baulding and Mauricio Gomez.

In the opening fight of the tournament, a super scramble ensued against 10P Vegas’ Andy Varela, with Steele pulling out a slick submission in OT to clear a path for him to the semi-finals against Mason Fowler. On the other side of the bracket, Roberto Jimenez took out both Nathan Orchard and Hunter Colvin with quick and clean submissions in regulation time to secure his spot in the finals. Clearly, Jimenez was the favorite going into the tournament, but unfortunately succumbed to Fowler by submission in OT.

At Jitz Kings, Jimenez was again a favorite to move into the finals but got stopped in the semis with a heel hook by Gracie Barra’s, Pedro Marinho, whom Jimenez submitted in the gi a week prior at 3CG’s Kumite I.  It seems like it’s anyone’s game at this point with the trading of submissions each weekend between the two. One thing is for sure though, both fight the way that they should, rather than fighting cautiously within the tournament ruleset.

And that’s just the tip of the iceberg. Atos’ Tye Ruotolo is coming in hot off a victory against Nicky Ryan earlier this month. Black belt veterans John Combs and Johnny Tama are coming hungry from Jitz Kings. Canada’s Pierre-Olivier Leclerc could be the dark horse of the tournament. And then there’s the legendary Vagner Rocha. Need I say more?

So let’s break down the first round match ups.

The two youngest competitors of the tournament go head to head in what one can only imagine will be a barn burner. This month alone, Jimenez has secured impressive submission victories against Pedro Marinho (gi), Nathan Orchard, Manuel Ribamar (gi), Yuri Villefort and Hunter Colvin. It would not be surprising for him to add one more to that list by way of Ruotolo — if he can secure a solid position against the scrappy ADCC standout.

In a last minute switcheroo due to a “contractual obligation” with 3CG’s streaming partner (FloGrappling), John Combs now fights Pierre-Olivier Leclerc instead of Johnny Tama in the opening round.  Admittedly, I don’t know much about Leclerc except that he is a purple belt standout (and IBJJF medalist) from Tristar in Canada who is also a regular in the blue basement with the DDS (Danaher Death Squad). With teammates like Ethan Crelinsten and Oliver Taza, one can only expect that Leclerc will bring the heat to Easton black belt Combs in this first round match up. If Leclerc can avoid Combs’ nasty guillotines and his snazzy wrestling, this could be a very entertaining match to watch that will no doubt increase the star power of both fighters.

The Combat Jiu-Jitsu World Champions will literally collide in this opening fight. I envision this will be an all-out gritty scrap with crazy scrambles, which is what new black belt Kody Steele is quickly becoming known for. Extremely agile on his feet, Steele will keep Rocha on his toes until this epic battle hits the mat where it will become a war to take control of the back, or any other position for that matter. If Steele can avoid the infamous gas mask, I see him possibly edging out Rocha and adding another impressive win under his belt.

Rounding out the bracket are, in my opinion two of the hungriest grapplers in the game. Always down for whatever challenges are put in their way, both Marinho and Tama will put their passion on the line and battle technique for technique. No-Gi World Champion, Johnny Tama will push the pace with his open guard wizardry and perhaps throw a Tama Lock into the mix, while Marinho will bring the porrada style passing and sneaky submissions. If Marinho can explode past Tama’s guard or catch him off guard in the same heel hook he caught fellow Ecuadorian, Roberto Jimenez in, this could be yet another fireworks of a first round match up.

While I am disappointed that the Combs vs Tama first round match up didn’t happen, I think that this updated bracket will create a very exciting road to the semis and final. It is literally anyone’s game at this point – which is what makes 3CG’s Kumite III the hottest No-Gi card of the summer.