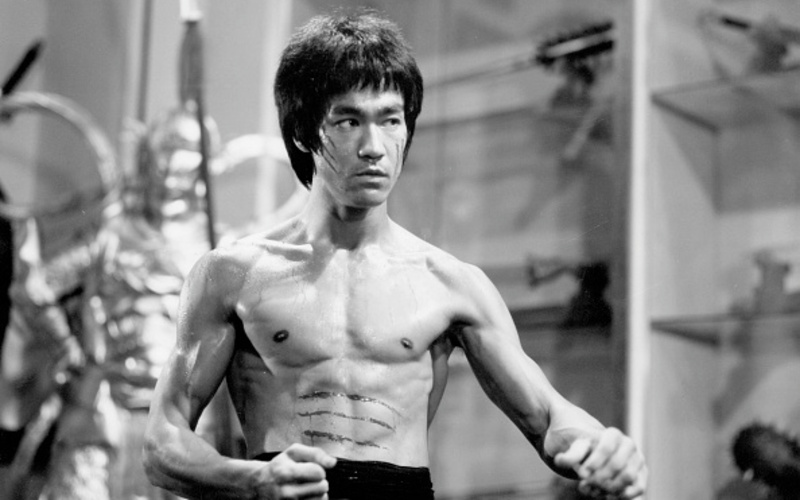 This month, ESPN released the highly anticipated 30 for 30 documentary, “Be Water”, which analyzes the incredible life and career of Bruce Lee.  A philosopher, actor, director, screenwriter, producer, and martial artist, Lee was born in San Francisco, California in November of 1940.  Named by Time Magazine one the 100 Most Influential People of the 20th Century, Lee is one of the most renowned martial artists of all-time and inspired an entire generation of UFC fighters. For instance, in a 2013 Bleacher Report piece, UFC fighters such as Kenny Florian, Urijah Faber, Randy Couture, Frank Shamrock, Mauro Ranallo, Roy Nelson, King Mo Lawal, Michelle Waterson, and Uriah Hall, released statements speaking of their respect and admiration for Lee.  A powerful quote in the piece comes from Florian when he states, “Bruce Lee was my first hero growing up. I was a huge kung fu fan and me and my brothers would watch kung fu movies every weekend. For me, I didn’t see him as a mixed martial artist, but as the ultimate martial artist”. The term of the ultimate martial artist is the perfect fit for Bruce Lee, as he respected/trained in each discipline of MMA, and he even founded Jeet Kune Do, which is a hybrid martial arts philosophy that draws from different combat disciplines.  Also, Lee has a lengthy martial arts lineage, he trained in Wu Tai Chi Chuan, Jing Mo Tam Tui, Choy Li Fut, Western Boxing, Epee Fencing, Judo, Praying Mantis Kung Fu, Xing Yi Quan, and Jiu-Jitsu.  This diverse training also applied to his physical conditioning as Lee had a dedicated fitness regiment in which he focused on total fitness, muscular strength, muscular endurance, cardiovascular endurance, and flexibility. Therefore, Bruce Lee was the complete package, he trained in every discipline of MMA and was a physical specimen, thus, the question must be raised, Could Bruce Lee successfully compete against the best fighters in the UFC?

As previously mentioned, Bruce Lee founded Jeet Kune Do, and he trained dozens of students on this form of martial arts. One of the most talented students was Ted Wong who would often challenge Lee in extremely competitive sparring sessions. The YouTube channel Beerdy: Bruce Lee Central was able to restore an old two-minute recording of Lee and Wong sparring. The talent of Lee is showcased throughout the video, his footwork is immaculate, his ability to read Wong and maintain the distance is simply incredible.  Also, around the 41-second mark, Lee has some beautiful moments, he lands a solid punch as Wong lunges in, then with Wong staggered, Lee trips his legs, and has top position.  Another talent that is displayed throughout the video is Lee’s ability to quickly react to a situation, for instance, at 1:11 of the video, Wong tries to get close, but Lee hits him with a fast punch/kick combination, which pushes Wong back. Now, some will notice that Lee and Wong are wearing protective headgear, the only reason for this protective measure is that the session took place in the state of California which required such gear. Therefore, during this limited sparring session, Lee showcases his ability to time the opponent, maintain distance, hit with power, react quickly, move his feet, and defend.  In conclusion, this video proves that Lee possesses the skills necessary to compete successfully in the UFC.

Mike Moh: Actor/Martial Artist – Played Bruce Lee in Once Upon a Time in Hollywood.

Bruce Lee is one of the most talented, disciplined, and well-conditioned athletes in the history of the world. However, Lee’s training methods from the 60s and 70s have been vastly surpassed, especially as MMA has grown in popularity and notoriety around the world. Therefore, Lee would struggle immensely in the modern UFC if he attempted to use his antiquated methods/techniques, now that does not mean Lee is not talented, it simply refers to the era in which he lived. Now, if Lee had grown up in the modern era with the current training, techniques, and coaching related to MMA, he would be a major success in the UFC or any other MMA organization. In conclusion, just imagine, Bruce Lee with a mastery of the modern and more advanced techniques, combined with his amazing physical and psychological abilities, the man would undoubtedly defeat many of the top fighters at the 135 lb. division.