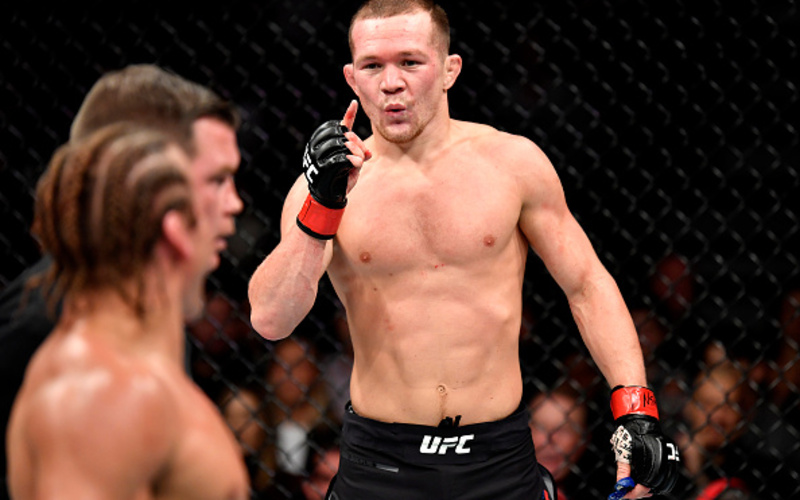 At UFC 251 on Fight Island, Petr Yan (14-1) will face Jose Aldo (28-6) for the vacant bantamweight title. This booking is the strangest of all three title fights on the stacked card. Aldo has no official wins in a division full of top contenders. If Yan wins the belt, he will have become a champion without fighting a top-five fighter in his division. If Aldo can win, he will be champion with a 1-1 record in his division. Either way it goes, the man with the belt will have to still prove he is the best bantamweight in the world. Make no mistake, though, this is an exciting contest between two skilled athletes.

If it were 2016 and featherweight, there would be major confidence in the skillset of Jose Aldo to deny Petr Yan’s pressuring game. Yan likes to put his opponents against the fence and catch them as they try to circle out. Catching an opponent while moving is a great way to deliver damage and knock an opponent of their feet. Aldo is one of the best at pivoting off-line and denying interceptions. This makes a prime Aldo a nightmare for someone with the pressuring game of Yan. In addition to great footwork, Aldo makes excellent use of his head movement and pulls out of opponents strikes to counter. This is a valuable skill to have against a come-forward pressure fighter like Yan. If Yan intends to inflict damage, it’s likely that Aldo will be able to avoid the strikes and punish with counters.

Unfortunately, father time is undefeated, and Aldo is starving himself to fight in the bantamweight division. The Aldo that fought Marlon Moraes (22-6-1) made a good show of himself but lacked the staying power against a frontrunner in Moraes. For Aldo fans, this is not a good sign as Yan has fought five rounds at a high pace before. Yan is likely able to keep the pace on Aldo and force him to keep working. Throughout his career, Aldo has managed to keep fighters at bay with solid counters and immense power. However, the cut to 135 and age has diminished his already lacking cardio to the point where it is doubtful that he manages to keep pace for more than one round.

Yan has also shown that he is a threat in every phase, with excellent clinch throw takedowns and good top control. Prime Aldo would have no problem dealing with the clinch throws of Yan, however bantamweight Aldo managed to get lateral dropped by Moraes in the third round of their matchup. Therefore it’s likely to assume Yan will get the better of Aldo in clinch exchanges.

It is a testament to the greatness of Aldo that four years after his prime he’s still one of the best fighters in the world. Unfortunately, he is now facing what is possibly the best bantamweight right now in Yan. One hope for Aldo fans is that Yan is a slow starter who likes to make reads before committing. This made Yan’s fight with Jimmie Rivera (22-3) competitive as Rivera was able to move in and out. As a result, Rivera was able to put work on Yan. Eventually, though Yan was able to adjust and steal rounds with violent knockdowns as Rivera moved out from the cage.

Aldo Has the Weapons

Aldo can repeat Rivera’s performance, but unlikely that he keeps it up for a full 25 minutes. Yan’s tendency of waiting on reads may allow Aldo to bide time. However when the engagements happen its unlikely that Aldo will get the better of them for long. Aldo’s best chance is to catch Yan coming forward in the early going and finish the fight from there. This will likely be the best boxing match in MMA since Holloway vs Poirer, at least for the first couple of rounds. Then we will probably see Yan break the former featherweight champion apart piece by piece. If you like to bet, a safe bet to make would be Yan by 4th or 5th round knockout. If you’re determined to pick Aldo its probably best to bet an early-round knockout.

Thanks to the UFC matchmaking machine we now get to watch a beloved legend get the tar beaten out of him. When it happens, we still won’t know who is the best bantamweight in the world. Thanks, Henry Cejudo.