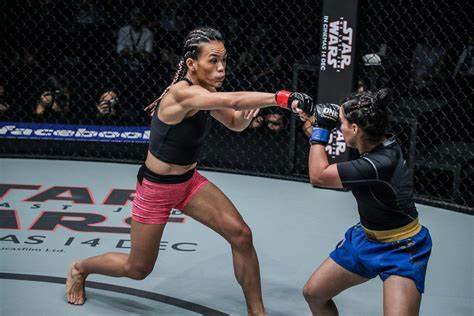 “The Panda” Xiong Jing Nan sits upon her throne in ONE Championship’s strawweight division. She won the title in 2018 and has successfully defended it three times. However, Tiffany Teo is lurking in her shadows.

Xiong has shown her power inside the ONE Circle. She has three KO/TKO performances, including a fifth-round TKO over Angela Lee at ONE: A New Era. Although she failed in her attempt to become a two-weight World Champion by dropping to atomweight, she has been impeccable in her natural weight class.

But the division continues to evolve and grow, and with that comes challengers eyeing her gold belt.

This is a look at the inaugural ONE Championship athlete rankings for the strawweight division.

Beginning the list on the first-ever strawweight rankings is Maira Mazar. The 6-3 pro is 3-2 since 2016 and made her ONE debut earlier in 2020 in a losing effort to Ayaka Miura.

The Brazilian is a sanda specialist with four knockouts and one submission on her pro record.

Mazar has joined Evolve MMA in Singapore to develop her complete mixed martial arts arsenal and work her way up the rankings to get a title shot.

Holding a 10-3 professional record, Ayaka Miura holds down the #4 spot in the inaugural rankings.

Miura was riding a six-bout win streak into her meeting with Tiffany Teo earlier in 2020, but the streak was broken, sending her toward the back of the pack. The Tribe Tokyo MMA representative trains under Japanese legend Ryo Chonan.

The setback could prove beneficial to Miura as she can work on her weaknesses and come back stronger than before. The judo artist has an array of submissions to her credit, and once she begins to blend them efficiently into her all-around game, Miura will be a top contender.

“Unstoppable” Angela Lee failed to dethrone Xiong in their first meeting but retained her atomweight title when they met a second time. A trilogy bout seems inevitable, but which weight class it happens in, or a possible catchweight, is unknown.

The bouts between the two have been epic showcases with dramatic finishes.

While Lee is 0-2 at strawweight, she showed that she is the near-equal of the World Champion. The 10-2 atomweight queen is still young and getting better by the day. As she matures, the future is bright at strawweight.

Michelle Nicolini picked up the biggest win of her career in 2019 when she upended Lee at ONE: Masters of Destiny. The unanimous decision victory propelled her to the forefront of the division.

The Brazilian Jiu-Jitsu World Champion has a 6-2 mixed martial arts record with only one loss in the past five years.

Training out of Vila De Luta, Nicolini is a constant threat on the ground. However, as her stand-up improves, she will become a bigger factor and tougher test for whoever the champion may be when she challenges for the gold.

The next logical challenger for Xiong and the ONE Strawweight World Championship is Tiffany “No Chill” Teo.

The two previously met in January 2018 with Xiong winning by fourth-round TKO, but in the two-plus years since the meeting, Teo has rebounded with crucial back-to-back victories, including a decision over #2-ranked Nicolini.

Two years is a long time in the sport, and the rematch would test how much she has grown since their first meeting. The Singaporean is 9-1 in her professional career and on the doorstep to another title opportunity.