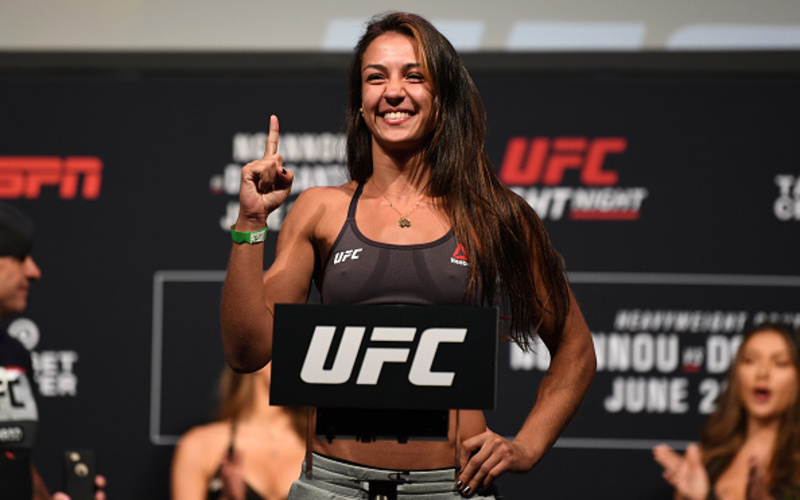 The Octagon descends on Yas Island for a star studded pay-per-view at UFC 251. The “Fight Island” initiative was to provide opportunities to international athletes who cannot enter the US due to travel restrictions. Brazil are the second largest producer of UFC athletes behind the USA.

Therefore, it will come as no surprise that a total of seven Brazilians feature on July 11. High profile former champions Jose Aldo and Jessica Andrade have garnered much attention. Meanwhile, welterweight Elizeu Zaleski dos Santos has already been covered here on MMA Sucka. Two fighters who are flying under the radar though, are Amanda Ribas and Leonardo Santos.

The case of TUF: Brazil 2 winner Leonardo Santos is a peculiar one. Santos has never been ranked at lightweight, but that hasn’t stopped bold claims that he poses the greatest threat to champion Khabib Nurmagomedov. With victories over established UFC names like Kevin Lee, Rocco Martin and Stevie Ray, he faces undefeated promotional newcomer Roman Bogatov on Saturday.

Santos is 17-3-1 as a pro, amassing a 6-0-1 record in his eight year stint with the UFC. Despite having not lost a fight within the organisation, and in over a decade overall, you’d be forgiven for assuming Santos was being ushered towards the divisions elite. A 4th degree BJJ Black Belt with a powerful overhand, Santos is one of the greatest lightweights in the world. Catch him early doors in the preliminary portion of the card.

Much like her aforementioned compatriot, Amanda Ribas is a talented grappler who has used that foundation to evolve her striking game. 9-1 as a pro, her only loss comes against fellow UFC fighter Polyana Viana. Ribas is 3-0 in the UFC strawweight division and will make her flyweight debut against Paige VanZant at UFC 251.

Making her promotional debut a little over 12 months ago, Ribas is still relatively fresh amongst the UFC ranks. However, she made a huge statement in her sophomore bout, spoiling Mackenzie Dern‘s return party following maternity leave. Ribas put on a striking clinic against the two-time World Jiu-Jitsu champion. The flyweight division is still relatively new and finding it’s feet. With such a dominant champion, competition for contendership is healthy and wide open. This gives Ribas an excellent opportunity to make noise and catapult herself into contention this weekend. With a marquee opponent in Paige VanZant and a main card slot on an illustrious pay-per-view, the stage is set for Amanda Ribas’ coming out party.