Raufeon Stots handed Cass Bell his first professional loss tonight at Bellator 242. The decorated collegiate wrestler submitted Bell in the third round by rear-naked choke at 1:24. Stots extends his winning streak to six and is now 14-1.

The first round saw Stots lock in a guillotine choke but then try to transition to Bell’s back. The rest of the round saw a grappling exchange with Stots coming out on top by finally taking Bell’s back before the round ended. The second round saw Stots control the fight on the feet and against the cage. Bell tried to defend against Stots grappling and wrestling but was unsuccessful. In the third round, Stots got Bell’s back again and locked in a rear-naked choke to get the win.

Stots said after the fight he was aiming for a finish in the first round with the initial guillotine choke he locked in. “I really wanted to finish him that first round. I’ve been working on that guillotine,” he said. “I didn’t want to give it up. I couldn’t get it done so I had to move on something else.”

“I want to be an exciting fighter,” he later stated. “I want to dominate and excite as quickly as possible.”

Click here to see the rest of our Bellator 242 results. 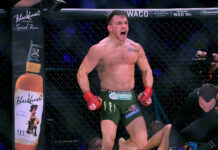