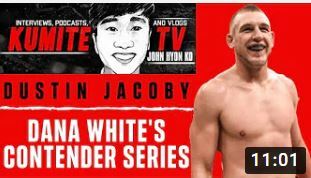 Dustin Jacoby heads into the main event of Week 1 of Dana White’s Contender Series looking for redemption. The Factory X mainstay has accumulated so much experience at the highest levels of combat sports outside of the UFC since his first stint and that has him feeling extremely confident. He will be facing Ty Flores Tuesday night.

“I was just so young. I had beat good guys but I just wasn’t ready. I got there [too] soon. I wasn’t mature like I am now. The experience I bring into the cage with me now is just a huge benefit.”

“I got to be like one of the only guys, I don’t know but you might have to fact check this, that is a UFC veteran, that is on the Contender Series which is kind of crazy to me but I’m just going to take that experience that I have from a decade worth of fighting and my rise to the top in Glory kickboxing and use it to put the hurt on Ty Flores.”

Other than maturing throughout the years, the 32-year-old power striker feels he will represent for all his past opponents when he enters the cage against Ty Flores in front of Sean Shelby and Mick Maynard at the UFC Apex.

“Every fight they say you leave a little bit of yourself in there which is true in these hard battles. But I also see it as I take a little bit away with me. Every opponent that I fought I take a little bit of them with me. So now, moving forward when I fight new guys it’s like a respect thing, I want to put on for all those former guys that I fought whether I won or lost. I’ve stepped into the ring with some absolute killers in Glory. Even the most hardcore MMA fans don’t even know who these guys are. Michael Dutt, Danyo Ilunga, Simon Marcus, Alex Pereira, Mourad Bouzidi. These guys are straight killers and I went toe-to-toe with ‘em.”

“I want them to watch the fight and be like, man there’s Jacoby, I’m proud of him, that’s a bad dude. I want to take all the beatings I’ve taken from them and turn ‘em on to somebody else.”

His upcoming fight with Flores has been labeled as a classic striker versus grappler matchup. This is not something Jacoby has worries too much about and expects to add another knockout to his resume.

“Anybody asks me how I’m going to win a fight and how I see it is by knockout. I see a big knockout. It’s just what I do, I knock people out and I see this fight going no other way. I promise you that I will finish this fight inside the distance and I guarantee you I will be walking away with a contract.”