ONE Appears on Top 10 Most Engaging Sports Profiles List 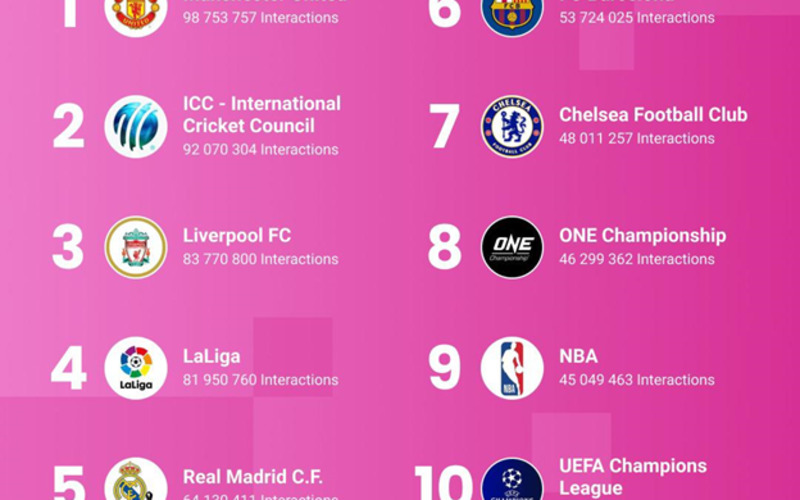 2020 has been a challenging and historic year due to the unexpected global COVID-19 pandemic. It has altered nearly every facet of our lives and changed how fans consume media while quarantined at home. ONE Championship has found success via social media and appeared on a list of the “Top 10 Most Engaging Sports Profiles on Facebook Worldwide,” according to social media analytics company Socialbakers.

With 46,299,362 interactions, ONE came in at #8 on the list and is the only martial arts representation. Seven of the ten spots on the list are soccer clubs or leagues. Only ONE, the National Basketball Association (NBA), and the International Cricket Council (ICC) represent sports other than soccer.

The lone American-based organization was the NBA with just over 45 million interactions.

The interactions for the sports organizations came from the first half of 2020, where many organizations struggled to put on events. As the event schedules heat up in the second half of the year, it will be interesting to see where these organizations land on the year’s final list.

As Asia’s largest sports media property, ONE is bolstered by a plethora of fans who can watch their events free-to-air through numerous broadcast deals or via their digital footprint. In the United States, ONE airs free on the B/R Live app.

One of the largest takeaways from the list is that all sports represented are sports that reach across all borders and nationalities. Diverse sports that break barriers and bring fans together. Martial arts is a global language, and ONE’s presence in Asia has helped place it on the list with many of the world’s biggest brands.