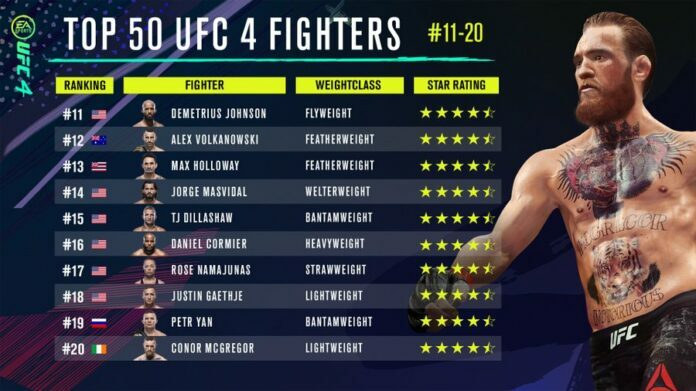 The fighters revealed today are those ranked #20-11 in terms of overall ability out of the entire roster. For the previous fighters, ranked #30-21, please click this link.

Did you miss the announcement for UFC 4 cover?

The twentieth ranked fighter is Conor McGregor. The Irish former featherweight and lightweight champion is one of the UFC’s most recognizable stars. McGregor last fought at UFC 246 where he achieved a TKO win over Donald Cerrone in 40 seconds.

The nineteenth ranked fighter is Petr Yan. The Russian is currently the UFC bantamweight champion. Yan won the vacant title with a TKO win over fellow bantamweight and former featherweight Jose Aldo at UFC 251.

The eighteenth ranked fighter is Justin Gaethje. The American is the current UFC lightweight interim champion and a regular provider of highlight reels. Gaethje won the interim belt during his match with Tony Ferguson at UFC 249.

The seventeenth ranked fighter is Rose Namajunas. The American is the former UFC strawweight champion. Namajunas comes off of a split decision win over Jessica Andrade at UFC 251.

The fifteenth ranked fighter is TJ Dillashaw. The American is the former UFC bantamweight champion. Dillashaw comes off of a TKO loss to Henry Cejudo at an attempt on the flyweight belt and has been suspended for some time after EPO was detected in his system.

The fourteenth ranked fighter is Jorge Masvidal. The American welterweight rose to fame after a five-second knockout of the previously undefeated Ben Askren. Masvidal comes off of a unanimous decision loss to current UFC welterweight champion Kamaru Usman.

The eleventh ranked fighter is Demetrious Johnson. The American flyweight is a former UFC flyweight champion and currently fights for ONE Championship. Johnson holds the record for the most successful consecutive defenses of a UFC title, with 11.