Ali Abdelaziz, one of martial arts premier managers as the CEO of Dominance MMA Management, will be working with ONE Championship. Dominance MMA features a roster full of the top stars in mixed martial arts, and Abdelaziz sees a big future in Asia’s largest sports media property.

“I’ve been following ONE since day one. ONE really brought something different in my eyes. It’s not just a fight show – it’s a spectacle,” said Abdelaziz.

“They organize, and they host the guests and the fans. It’s about going there, and looking good and feeling good. Everything is first class. It’s a pure martial arts event, a fight, a spectacle, and a concert all in one. And I think for a live audience, it’s a great experience to go watch ONE Championship fights, for sure.”

Two current athletes in ONE have grabbed his attention and stand out among the field. Those two are Garry Tonon and two-division World Champion Aung La N Sang.

Abdelaziz has already begun hearing from his clients regarding the working relationship as the athletes begin to see more options on the table.

Abdelaziz said, “About 7 or 8 years ago, I had a guy named Rustam Khabilov. He went on to beat Jorge Masvidal and had a huge UFC run. When he heard I’m working with ONE, he called me.”

“Also, Khabib’s younger brother, Osman Nurmagomedov, who is 9-0  and one of the best prospects in the world, called me,” continued Abdelaziz. “Even me and Khabib talked about having him – after his next fight – to join ONE.”

The relationship has already begun to show itself. Marcus Almeida and Ali Aliakbari have recently inked deals with ONE to join the roster. The two high-caliber athletes add instant depth to the organization.

“Some of the best fighters will come and show why we are doing this amazing partnership and why they are fighting in ONE Championship. It’s going to be nothing but first-class, and it’s going to be spectacular.”

“It will be great for the sport and the fighters. The fighters always come first in my heart, and that is how I feel ONE treats their fighters.” 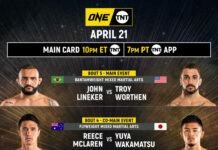