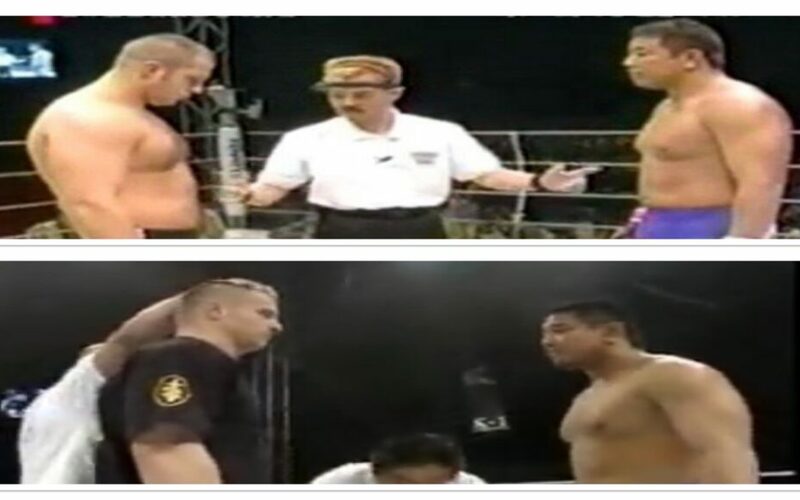 There is a lengthy history of pro wrestlers crossing over into MMA. From the nascent days of this sport, professional wrestlers have indulged their desire to go from work to a shoot. In this episodic series, I will review fights where pro wrestlers foray into the combat world. It’s like a weird, violent version of IMDB and I am DB (Dylan Bowker). This is Pro Wrestlers in MMA #5: Yuji Nagata vs Mirko Cro Cop/ Fedor Emelianenko.

Cro Cop was announced as the Pro Wrestler Hunter in the introduction for this one. Nagata looks to lock up right away as the bell sounded. Cro Cop shucks him off with ease then wards off another entry by pawing out with punches. Cro Cop is using feints and pawing his right at Nagata’s lead hand to gauge range. Mirko Cro Cop subsequently unleashes one of his vaunted left high kicks and Nagata falls to the canvas.

Follow up punches on the ground resulted in the bout being halted less than thirty seconds in. Royce Gracie would show respect to both men after the contest and Nagata seemed to be in a state of disbelief over the bout outcome. Although Cro Cop disintegrated him, there is sheer valor in taking your debut MMA bout against someone like Mirko Cro Cop. An elite fighter who would remain a killer might up until the end of his illustrious career.

After Nagata’s loss at Inoki Bom-Ba-Ye 2001, he would return to MMA competition at the Inoki Bom-Ba-Ye 2003 event. The IWGP heavyweight champion would again not be taking on a softball adversary when he stepped into the ring with Fedor Emelianenko. Who could have guessed that Fedor would still be booked for high profile fights in Japan 18 years later?

The two get into a folkstyle clinch early on with Fedor wailing bombs towards Nagata’s body. Nagata fakes a takedown attempt and gets lit up with punches as he charges towards The Last Emperor. Emelianenko is landing progressively heavier strikes as the bout goes on and Nagata is visibly registering the pain. Fedor catches a Nagata leg kick and drops the New Japan Pro Wrestling star with an overhand right.

Fedor isolates Nagata’s ankle and simultaneously threatens a variety of leg locks while also landing vicious ground and pound. Both men get back to their feet and Fedor lights up Nagata’s body with a kick. The two briefly clinch up until Fedor breaks and lands a clubbing overhand left which crumples Yuji Nagata. Nagata would turtle up and take some follow up soccer kicks/ body punches before the bout is waved off in Emelianenko’s favor.

Nagata had at least some offense in this fight but it was another objective annihilation against an elite caliber opponent. My score here is similar to the Cro Cop evaluation in as far as weighing the courage of a neophyte taking on the then-PRIDE heavyweight champion Fedor. Nagata would retire from MMA competition altogether at this point. He had an 0-2 record overall and spent 1:23 in the ring across the pair of prizefights.