Former Strikeforce and UFC competitor Jason “Mayhem” Miller once again finds himself jailed on multiple felony charges. Miller has been and out of jail in recent years. Just last year he pleads guilty to a felony charge of vandalism and a misdemeanor charge of violating a protective order.

Jason “Mayhem” Miller was involved in a serious incident in 2017 where he broke a table, punched holes in walls, removed doors as well as a garage door at his then girlfriend’s residence. He was charged with a single case of domestic violence. He’s had three other incidents with three other women between the years of 2015 and 2018.

He is currently in jail in Newport Beach, CA being hold without bail after being arrested Tuesday on multiple felony charges. He’s been charged with first-degree burglary, grand theft auto, and unlawful taking of a vehicle. 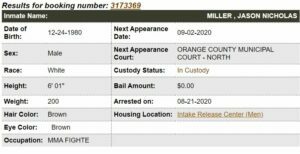 He was in court yesterday, and plead not guilty on the burglary and auto theft charges. His next court date is scheduled for September 2nd, and he’s being held without bail until that time.

He knew the victim in the latest burglary and car theft case, per Sgt. Karie Davis. The victim was not named, however.

Not his first rodeo…

Jason Miller has a lengthy relationship with the police. He had a lengthy standoff with SWAT officers after barricading himself in his house and live-tweeting the interactions. After hours of interaction, SWAT broke down his door, and moments later emerged with Miller in tow. Miller had tweeted that it was a “despicable” and that the LAPD was “Gearing up like the Bin Landen raid.” He later asked that SWAT not shoot him.

It’s a sad event in what has become a series of sad events in the life of Jason Miller. He’s already on probation for multiple felonies and will likely be facing some mandatory jail time as a result of his latest issue.