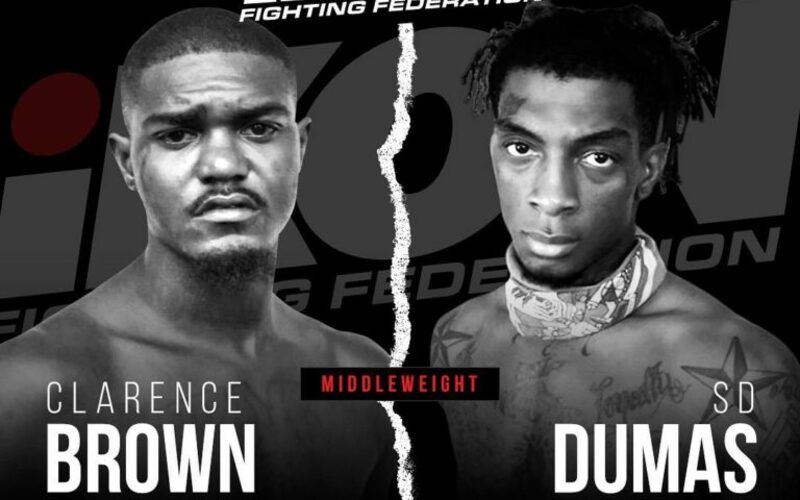 iKON Fighting Federation is a brand new MMA promotion that will be making its debut on UFC Fight Pass on September 24th. They recently announced a big portion of the iKON 1 card but are still working on finalizing it.

To start, iKON has announced the return of Christian Lohsen. He will take on 3-1 Dennis Hughes. Aj Cunningham will be taking on Jewel Scott in a featherweight bout. Dana White’s Contender Series alum Tyler Hill will be fighting Johnny Parsons. Ken Beverly will try to get one step closer to the UFC at iKON 1 when he takes on Ryse Brink. Also on the card, SD Dumas will be making his professional debut against an eight-fight veteran, Clarence Brown. Finally, the most recent fight they have made is Ravon Baxter will be taking on Miami’s own Allan St-Gelais, who will also be making his pro debut.

A fight that is flying under the radar for iKON 1 is SD Dumas versus Clarence Brown. Some may look at Brown’s record and the fact that it is Dumas’ debut and look past this fight. We are here to tell you not to blink. At 27 years old, Brown is known to be ruthless every single time he steps in the cage. Although his record isn’t the greatest, he has shown amazing grit even in his losses. Dumas will be making his pro debut after a successful 8-1 amateur career. He won the Island Fights middleweight title in 2019 and even fought for Cage Fury Fighting Championship earlier this year. Dumas is the number one ranked amateur middleweight in the state of Florida and the number one ranked middleweight in the entire southeast region. If I had to make a prediction, it would be that someone is going to sleep in our sleeper fight.

While in the midst of announcing fights for iKON 1, Dean Toole has also announced that they plan to have their second card, iKON 2, in San Carlos, Mexico on October 22nd. We cant wait to see what iKON has in store for the future. Make sure to catch them on UFC Fight Pass on September 24th and October 22nd.