Bare Knuckle FC 12 is back tonight, and we’ll have your results and fight recaps as they happen. For those of you who might be new to the sport, BKFC is the most exciting form of combat available today. The fights are fast-paced and there’s always plenty of action and blood for those who crave such things.

In the feature bout of the evening former UFC title contender Thiago Alves will meet former TUF competitor Julian Lane in a five-round clash of speedy and powerful strikers. It will undoubtedly be a great fight.

In the co-main event UFC veterans, Hector Lombard and Kendall Grove will square off in a match that should be interesting, to say the least. There’s a nine-inch height difference between the two and Grove holds a massive eight-inch reach advantage. It will certainly be an entertaining battle.

Here are the results for the previous event.

Fight Info: Both fighters seemed a little tight in the first round and it was quite competitive. Neither fighter was hurt but on my card, Alves landed the two biggest shots of the round and earned the round, 10-9.

Alves showed really good head movement and footwork to open the second round. Lane hung in the pocket and was active, but Alves seemingly landed the bigger shots and was more active. Alves won the second round and is up 2-0 on my card.

Good third round with both fighters relaxed and throwing plenty of shots. The bottom line is that Alves has better form, and was faster and more accurate than Lane. The fight is very competitive but Alves kept putting rounds in the bank.

Good round yet again. Lane landed the bigger punches and did more to control the action. Lane’s corner didn’t do much to help him, just yelling at the top of his lungs, “He’s a nobody, take him out.” Not too constructive at all. Lane wins his first round.

Final round and both men are unloading with big damaging shots. Thiago Alves was bleeding badly from the eye and the forehead. Doctors checked the cut and allowed it to continue. Both guys are unloading and Alves lands a huge uppercut and right hand at the buzzer. I’ve got it 49-46 for Alves, but judges will decide the winner.

Hector Lombard def. Kendall Grove by TKO (Strikes) at 1:50 of Round 1

Fight Info: Kendall Grove was swarmed on and dropped early in the first round. Lombard is pushing forward and delivering big shots. Grove was once again dropped by an overhead right and he looks to be in big trouble. Sure enough, the referee jumped in and stopped the fight as Grove was being bludgeoned.

Fight Info: It was a pretty interesting round that I felt Reggie Barnett had a slight edge in. The fighters utilized their speed, but nothing of power really landed for either fighter. They stopped fighting and just stared at each other with like five seconds left, prompting boos from those in attendance.

Reggie Barnett landed a big right hand and hurt Velazquez in the second round. He followed it up and landed a shot that dropped Abdiel Valazquez to the canvas. The second round was a big round Barnett who leads 20-17 on my card.

Reggie Barnett looked very good through three rounds. He’s doing enough to continue putting rounds in the bank. He’s up 30-26 on my card, and at this point, Velazquez needed to do something special to claw his way back in.

Good back and forth action in the fourth round. Again, neither fighter did enough to hurt the other, but it was a closer round.

The fifth round opened and Velazquez took a right hook to the body and a right tot he head. The headshot dropped him but he beat the count. Both fighters swung hard until the final bell, but Reggie Barnett did enough to earn the victory.

Christine Ferea def. Calie Cutler via TKO (Strikes) at 1:27 of Round 2

Fight Info: Calie Cutler was game, but Christine Ferea got the better of the action in the first round. She has more power and has a speed advantage as well. Nothing too damaging either way but Ferea won the round.

Cutler was beginning to show the wear on her face in the second round. The right side of her face was swelling and she started eating some big shots, including a right hand that dropped her. She was immediately dropped again. Ferea landed a damaging uppercut and ended the fight in the second round.

Lorenzo Hunt def. Erick Lozano via Knockout (Straight Right) at 1:58 of Round 3

Fight Info: Hunt looked to be in better shape and had better boxing. Hunt landed a big uppercut in the first, but Lozano hung in there and the two continued to scrap after the bell. Round one goes to Lorenzo Hunt.

Heavy back and forth action in the second round. Lozano threw wild shots and as a result, didn’t land as much or as clean as Lorenzo Hunt did. The fight is a little slower than anticipated, but Hunt is up two rounds.

The third round was slower and the pace wasn’t as fast as the first two. However, at the end of the round, Lorenzo Hunt stepped in and threw a monster right hand that landed clean and knocked Erick Lozano out cold. That was a wrap.

Josh Dyer def. Jarren Warren via TKO (Ref Stoppage) at 1:16 of Round 3

Fight Info: Jarred Warren and Josh Dyer came out and started blasting. The fighters were both pretty aggressive and the round was close. Dyer landed shots when Warren would lunge but overall Warren won the round on my card.

The fighters met in the middle of the right and Josh Dyer was getting the better of the exchanges, twice flooring Warren. Dyer seems the more powerful and closed out the round landing shot after shot.

Josh Dyer just threw heavier shots and hurt Jarred Warren with a series of uppercuts that eventually led the referee to jump in and halt the action. Big win for Josh Dyer.

Fight Info: Both fighters came out swinging and Elmore was dropping his hands and taunting Shoaff who answered with a right hand. Elmore dropped Shoaff with a shot to the head. The first round goes to Elmore based on the knockdown.

Shoaff clipped Elmore on the chin to open the second round. Both fighters landed at the same time but Shoaff got the worst of it and was once against sent to the canvas. Competitive round, but Elmore gets the nod based on the knockdown. Elmore is cut on the right eye and bridge of the nose.

Shoaff had his best round in the third. He landed more shots and the cleaner shots. Elmore is a mess and is bleeding heavily. I’ve got it scored 29-26 for Elmore after three rounds. Shoaff seems to have the momentum on his side.

The stop the fight to check Elmore’s cut in the fourth and Shoaff continued to control the action. Elmore landed a big right hand that dropped Shoaff. He was losing the round until the knockdown and I’ve got it scored 39-35 for Elmore.

Elmore knocked Shoaff down to open the round. At this point, Shoaff needed a finish to win. Both fighters through big shots and the round were controlled by Shoaff but the knockdown pushed it in Elmore’s favor. I’ve got it 49-44 for Elmore.

Jarod Grant def. Joshua Boudreaux via TKO (Strikes) at 1:23 of Round 2

Fight Info: Jarod Grant was all over Joshua Boudreaux early, sending him to the canvas three times in the first round. He landed a three-shot combination that dropped him. He knocked him down two additional times, but Boudreaux complained of being hit in the back of the head. All Grant early.

Grant opened the second round and dropped Boudreaux three more times in the second before the referee calls a halt to the action and waved it off. Dominant victory for Grant who was in control from the word go.

Kenmon Evans def. Robert Washington via KO (Right Hand) at 1:39 of Round 1 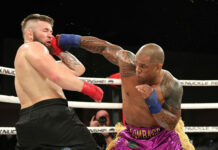 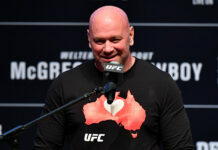