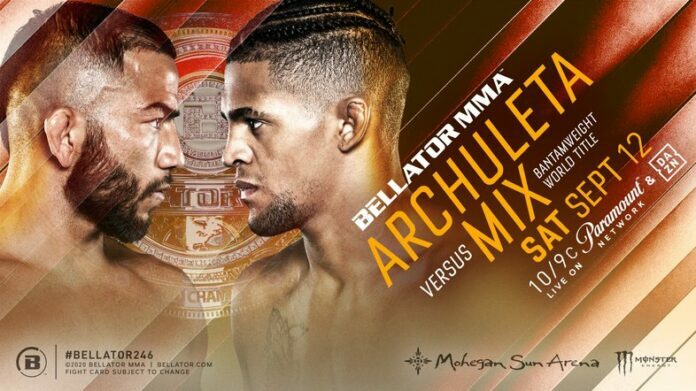 Bellator will crown a new bantamweight champion as the undefeated Jackson-Winkeljohn fighter Patchy “No Love” Mix (13-0) takes on featherweight champion contender Juan “The Spaniard” Archuletta (24-2). Mix came into Bellator with much hype and has finished all of his fights Bellator fights in highlight-reel fashion. Archuleta recently took part in the featherweight Grand Prix losing to Patricio Pitbull by decision. He rebounded with a win over Henry Corales. The bantamweight belt was previously vacated by Kyoji Horiguchi after suffering an ACL injury.

The co-main event will see two welterweight title contenders clash in an interesting stylistic match up. Jon Fitch (32-7-2) takes on Neiman Gracie (9-1). Fitch fought former welterweight champion Rory MacDonald in the welterweight Grand Prix with the title being on the line. Fitch went to a draw with MacDonald in a fight many thought he had won. Gracie fought MacDonald in the semi-finals of the GP and lost by decision. Whoever wins between these two will likely be up to face current champion Douglas Lima.

Check out our pre-fight interviews with some of the fighters here.

You can watch the ceremonial weigh-ins live at 11 am EST below:

Bellator 246 airs live from the Mohegan Sun Arena on Paramount Network and DAZN. Prelims start at 8:45 pm EST on Bellator’s Youtube chanel and the main card starts at 10 pm EST.