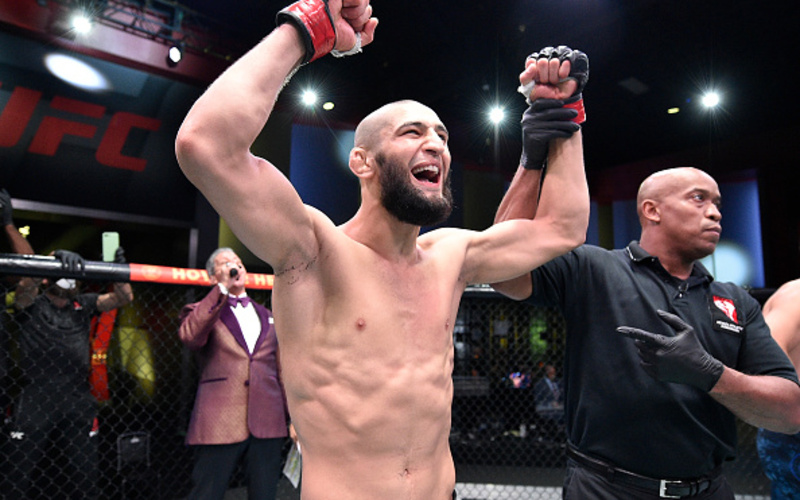 To say that Khamzat Chimaev has burst onto the scene is an understatement. Making his debut on short notice at UFC on ESPN 13, Chimaev has been simply flawless since. With a record of 6-0 with six finishes before the UFC, it was clear Chimaev had talent. Little did we know just over 66 days later he would be setting records for the quickest fighter to reach 3-0 in the modern era.

Landing a crazy 124-2 strikes in his against Wales’ John Phillips in his debut, Chimaev instantly stated that he wanted to go again. We know that the ground game is Phillips’ weak point, so for him to lose there was no real surprise. It was the dominant fashion that he did which impressed everyone. Chimaev submitted Phillips by d’arce choke in the second following a true shut out performance. As predicted, Chimaev received a performance of the night bonus for this performance.

10 days later it was time to go again. This time it was against the debuting, former Cagewarriors veteran, Rhys McKee. If you thought the Phillips fight was dominating, that was nothing compared to Khamzat Chimaev vs. Rhys McKee. 68-0 was the strike differential between the two men. McKee didn’t land a single strike on Chimaev. A first-round ground and pound finish on this occasion again saw a performance of the night bonus going Chimaev’s way.

What many people forget is that these two fights were at two different weights, firstly middleweight and then welterweight. He’s a contender in both divisions.

Following the pure domination shown in his first two bouts, it was clearly time for Khamzat Chimaev to have a step up in competition. UFC president, Dana White decided that the time had come to ‘double book’ Chimaev. Firstly, he signed a contract to take on 11 fight UFC veteran, Gerlad Meerschaert. After this, it is understood that he will be taking on two-time title challenger Damien Maia.

At UFC on ESPN 11, there was a little needle between Chimaev and Meerschaert for the first time in the Swede’s career. Understandably, Meershaert felt disrespected that the UFC were looking past him ahead of Chimaev’s scheduled bout with Maia.

What played out truly put two divisions on notice. We all expected that if Khamzat Chimaev was to dominate (again), it would be with a heavy wrestling and ground and pound game(again). Instead, a 17 second brutal knockout was on the cards.

Khamzat Chimaev only made his UFC debut in July and already has 3️⃣ wins under his belt 🤯#UFCVegas11 pic.twitter.com/aHPkUrZEj3

The odds for Khamzat Chimaev’s bout with Damien Maia were released post-fight. Chimaev is a whopping -400 favourite against the veteran Maia.

What’s next for Kamzat Chimaev?

Although it appears that Damien Maia is next for Khamzat Chimaev, is this the right fight to make? In a word, no. With a win over Maia at 170lbs, what do we learn about Chimaev? Yes, Maia is certainly a veteran of the game and a well known name. He has competed for both the middleweight and welterweight titles but it’s no secret that he is way past his prime. The 42 year old also recently suffered a knockout loss to Gilbert Burns.

There is no question that Chimaev needs to have an opponent in the top 15 at welterweight. Let’s see him face off against Leon Edwards. There is no questioning that Edwards is deserving of a shot at the title but whatever reason he appears the avoided man at 170lbs. For the ‘hardcore’ fans, Edwards is very much respected. For Chimaev, a win over Edwards would catapult him into the title picture at welterweight. For Edwards, a win over the hottest prospect in the game would certainly help his title push. With a win over #3 Edwards, Chimaev could easily take his place.

Vicente Luque or Steven Thompson could also be outsider shouts. Both of these men are well respected in the division, have barley ever been finished in their careers (a combined 3 finish losses in 47 fights) and are experienced. They will also provide Chimaev with two alternative looks, of which neither he has seen.